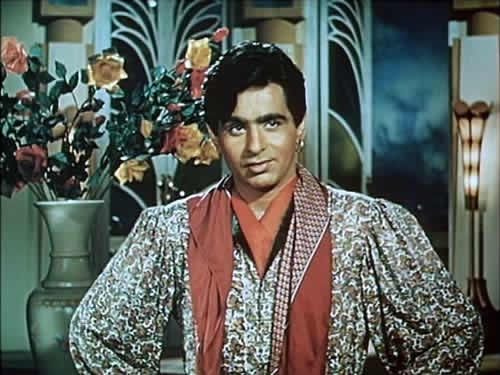 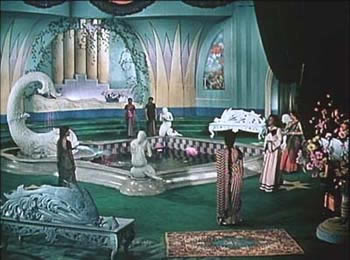 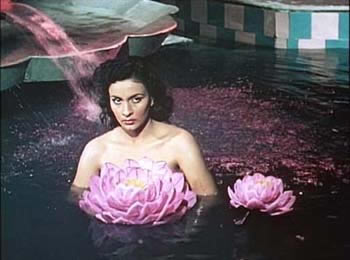 AAN is said to have been India’s first technicolor feature, and director Khan went wild with the possibilities, crafting a highly surreal swashbuckler about a princely kingdom that lies, visually speaking, somewhere between Rajasthan and mad King Ludwig’s Bavaria. Though there are echoes here and there of the real excesses and hybrid architectural fantasies of India’s pre-independence maharajas, as well as themes glorifying peasant resistance and social egalitarianism, mostly this is an over-the-top operatic fairytale that looks, at times, like Disney animation come to life—though Disney would not have dared the out-front eroticism and fashion and footwear fetishism that permeates Mehboob’s mise-en-scene. There is clear influence of Hollywood fantasy adventures such as THE THIEF OF BAGDAD (both the 1924 silent version with Douglas Fairbanks and the 1940 sound version with Sabu were well received in India), as well as of imperial Roman spectacles. Indeed, there are few stops that Khan does not eventually pull out, throwing in a camel stampede, a Dungeons-and-Dragons prison complete with rampaging lions, a Joan of Arc-like burning at the stake, and a floridly orientalist dream sequence that looks like something ballet impresario Serge Diaghilev might have hallucinated on LSD 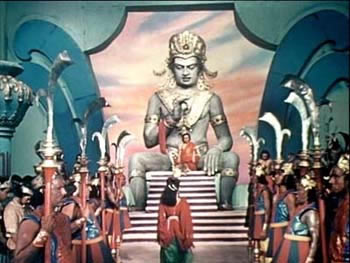 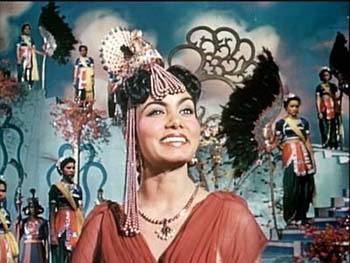 Nevertheless, those familiar with the director’s most famous film, MOTHER INDIA (1957), will also recognize his fondness for sunsets, vast Deccani landscapes (juxtaposed unconcernedly with obvious soundstage simulacra), a Soviet-influenced populism (exemplified by busty women silhouetted against bullock-carts), florid poetic dialog full of Urdu conceits (lover as moth, beloved as flame, etc.), and music, music, music. This is from the famous Badayuni and Naushad team, is all pervasive (twelve songs) and generally excellent. 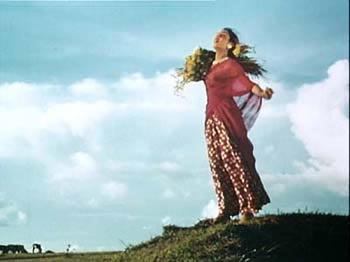 So is the casting, with Dilip Kumar at the height of his romantic charm as the roguish peasant leader Jai Tilak, and the Bombay Jewish actress Nadira (better known for roles as modernized vixens—e.g., Maya in 1955’s SHRI 420) as a terminally proud princess, who favors a semi-dominatrix wardrobe and keeps one eyebrow severely arched throughout most of the movie. Naturally, the farm boy falls for the ice queen big time and much of the film revolves around his taming of this shrew (hint: when she begins to appear in saris, you know it’s working), against a backdrop of palace intrigue and rustic exuberance. 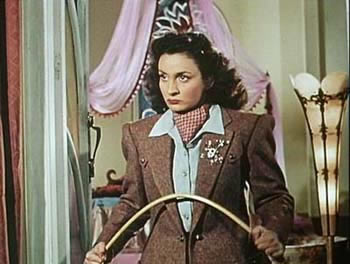 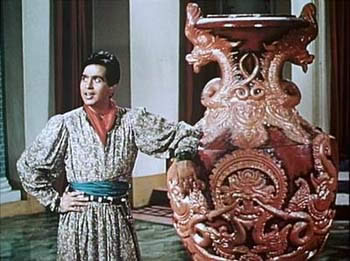 An opening narration, against a shot of Jai (Kumar) plowing his field, sketches an idealized Nation in which sturdy yeomen till the land in peacetime but trade their agricultural tools for swords when war threatens—here the community is known as the Haras (historically, this suggests semi-martial landowning castes like the Marathas and Gujars, who have sometimes consolidated their own kingdoms and even empires—though Indian history is hardly the point). The benign Maharaja to whom Jai owes allegiance (Murad), has a cruel younger brother, Prince Shamsher Singh (Premnath), as well as a spirited junior sister (Nadira) given to breaking horses and would-be suitors. Shamsher Singh’s ambitions are as flamboyant as his wardrobe, and he conspires to assassinate the raja—who his subjects believe has gone abroad for medical treatment—and to launch an increasingly despotic regime, signaled by his ranging the countryside in a Cadillac convertible and casting lustful eyes on village belles, especially the headstrong Mangala (Nimmi), who loves Jai. This in itself would be enough to set the two men at odds, but for good measure, Jai (who evidently likes challenges) falls in love with Shamsher’s icy sister, after taming her wild stallion in a tournament. Though she truly appears to hate him (generally a sign, in Hindi cinema, that love is just around the corner), he woos her by dropping in and out of her Sleeping Beauty-art deco castle, stealing her scarf, squirting her with Holi colors, and dispensing double entendres rich in imagery of romantic martyrdom. 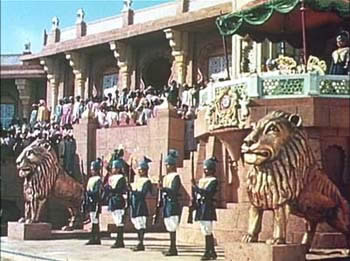 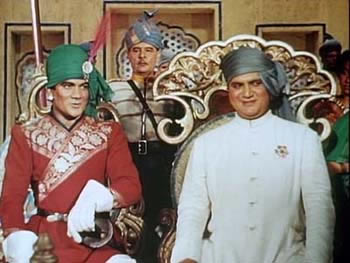 Will this approach eventually work? Will Shamsher Singh, after kidnapping Mangala and trying to rape her, finally get his comeuppance? Will the kindly old Maharaja turn out to not actually be dead but just disguised behind a really ridiculous false beard, and actually intent on abolishing the monarchy and instituting Democracy? Use your imagination, or rather, let Mehboob Khan beguile you with his own more frenzied one, as well as his everything-including-the-kitchen-sink approach to visual spectacle. Dilip Kumar, who had by this time earned a reputation as Bombay’s “king of tragedy” and was allegedly beginning to identify too much with his morose characters, is said to have accepted the role of Jai after a psychiatrist advised him to do “lighter” films. Indeed, the good doctor should have been well pleased by AAN, and you should be too. 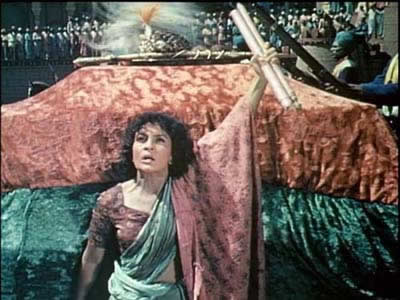 [For those who don’t know Hindi, the one drawback to the otherwise good quality Eros Entertainment DVD of AAN is that the songs—which here comprise nearly fifty per cent of the running time—are unsubtitled.]