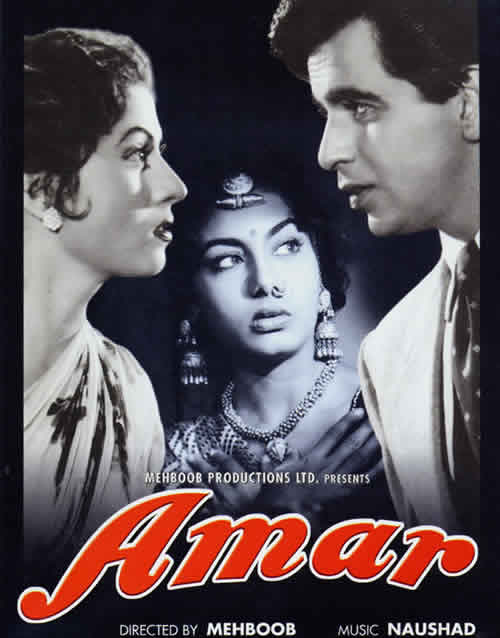 In a plot that bears more than a passing resemblance to that of BABUL (1950), Dilip Kumar plays Amar, a rich and successful young lawyer who is known for his high ideals and willingness to assist local villagers, especially in their dealings with Sankat (literally, “affliction,” a local landlord and bully, played by Jayant). Sonia (Nimmi) is an innocent and vivacious village girl who talks to animals and birds and dances unselfconsciously by babbling streams—in short, the Shakuntala type (and the role played by Nargis in BABUL). She falls for Amar one day when her dupatta blows off and lands on his head, leading to a teasing exchange. But when the lawyer sustains a cut finger, Sonia spontaneously rips her threadbare scarf to bandage it—a motif that invokes a famous Mahabharata tale in which Draupadi does the same for Krishna, thus putting him in her debt. Indeed, Amar’s little flesh wound, and the possibility that it will “infect” him further, dominates the ensuing dialog back at his law office. And well it might, for although Amar soon becomes betrothed to, and falls in love with, the sophisticated Anju (Madhubala), the daughter of a local zamindar and his own father’s choice for him, and although Sonia is likewise engaged, by her scheming stepmother, to the dreaded Sankat, Amar’s prior link with the village girl refuses to go away. And one Dark and Stormy Night, when the dripping wet Sonia takes shelter in Amar’s mansion while fleeing the wrath of Sankat, the young lawyer loses control of himself.

Such little cross-class indiscretions, when elite men take advantage of rustic and especially low-caste girls, are known to be routine enough in rural areas, and generally hushed up with money or intimidation. What’s different here is that Amar is a man of both principle and cowardice—a combination that might strike some viewers as odd in a “hero” (the Encyclopaedia of Indian Cinema observes that the film was not a commercial hit, "possibly because the audience refused to accept Dilip Kumar in a negative role")—who suffers crushing guilt yet cannot bring himself to openly confess his indiscretion. One may assume that he is constrained by social circumstance: by the impossible class gulf that divides him from Sonia, and by the fact that an admission of guilt would wreck his reputation, his career, and his hopes of marrying his beloved Anju. For her part, Sonia bears his secret (and, it soon turns out, his child) with a slightly-loopy stoicism and puppy-like loyalty. Both Anju and Sankat gradually begin to suspect that something is amiss, and Amar repeatedly comes close to fessing up, especially when dragged to the local Krishna temple by Anju, who is herself an idealist and champion of the downtrodden, where a bhajan informs him that “This is the temple of justice, the house of God; say what you have to say—what is there to fear?” But many plot turns, each accompanied by a memorable Naushad song (nine in all, and entirely sung by the female characters), precede the final revelation. 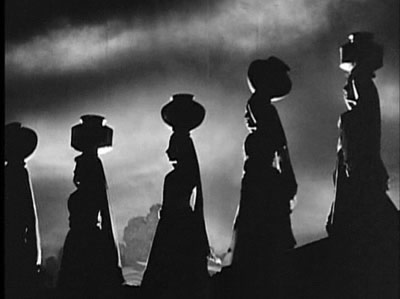 The cinematography is notable for its use of light and shadow, ingenious framing, Mehboob’s trademark sunset silhouettes, and frequent and lingering closeups of the principals’ tormented faces. Ornate, surreal sets (typical of this period) are likewise used to good effect. Like BABUL, this is an operatic “he done her wrong” fantasy that delights in heavyhanded symbolism (shattered windows, torn dupattas, flickering lamps) and mythological allusions: the opening reference to Draupadi is renewed during Sonia’s climactic humiliation by angry villagers, when (like the Pandava heroine being disrobed in the Kauravas’ gambling hall) she calls on Krishna for help, and her plea reaches her own “immortal,” Amar.

[The Eros/B4U DVD of AMAR features a generally excellent quality print of the film. Subtitles are also unusually accurate, but are unfortunately missing for the many songs.]