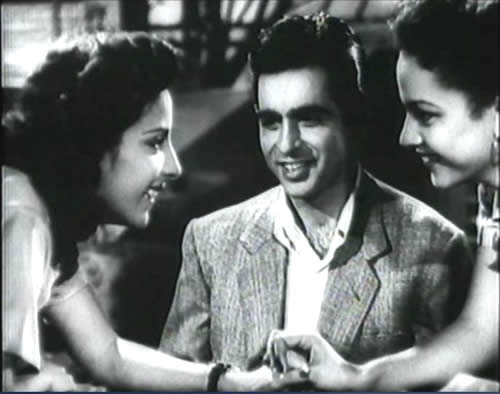 Like many films of the immediate post-Independence era, this tragedy of manners focuses, in a darker than usual register, on both the allure and danger of modern western lifestyles and modes of social behavior. Though their allure would appear to be felt by all, their danger is unequally shared between the sexes: since nationalist ideology posits woman as the embodiment of tradition as well as the guardian, through her chastity, of male honor, she incurs the greatest risk in any flirtation with the modern—a flirtation which (given the dictum that her sole God must be her husband) is tantamount to adultery. The suspicion of this sin, nurtured by innocent misunderstandings and repeated failures of communication in a world governed by verbal codes that discourage straightforward speech, lies at the core of the strange and destructive “love triangle” in this film. 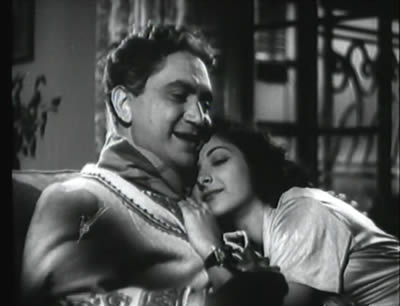 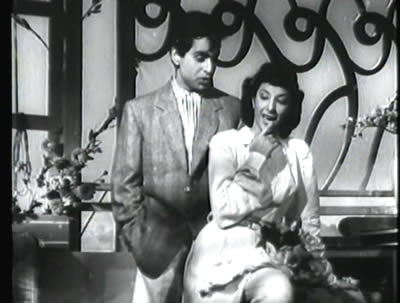 As the spoilt only child of a doting millionaire, Neena (Nargis) divides her time between palatial homes in Shimla and Bombay. We first see her in her hill station lodge, being dressed in riding clothes by attentive servants, surrounded by amenities (including a salon-style hair dryer) connoting the last word in westernized luxury. Yet the supplier of all this, Neena’s devoted “Daddy” (Sapru) displays, in their first exchange, a hint of reticence about their lifestyle (complaining of sore limbs from excessive horseback riding in his “old age”) that is suggestive of deeper unease to come. Moreover, in implying that his nineteen-year-old daughter is approaching marriageable age (when she complains that she does not like to ride alone, he quips “That can soon be remedied…” causing her to blush), he also alludes to his traditional responsibility to insure her chastity and supervise her transfer to the oversight of another man. Soon after this, the headstrong Neena loses control of her horse and is rescued by a dashing stranger, Dilip (Dilip Kumar); her horse’s fall to its death from a high cliff prefigures the plight into which the principals will soon plunge, driven by Neena’s heedless disregard of social propriety. For when Dilip introduces himself to Neena’s dad (who has come to the hospital to fetch her after her mishap), we sense a definite chill: the old man appears dismayed by Dilip and Neena’s flirtatious exchange and her invitation to Dilip to come visit them at home. Later, when Dilip sings of his budding love for Neena (Hum aaj kahin dil kho baithe, “Today I lost my heart somewhere”), and she apparently reciprocates with a lovesong of her own (Dar na mohabbat kar le, “Don’t be afraid to fall in love”), her father begins showing his disapproval, cautioning her that there are standards to which “the world” adheres that are not taught in college (an indication of Neena’s own level of education). Neena pouts and accuses him of holding views “from 150 years back”; in the matter at hand (the question of whether to invite Dilip to her birthday party) she again manages to get her way. Viewers may wonder why her father seems so disapproving of an apparently genteel boy of comparable social status. This mystery lingers until after the old man’s unexpected demise from heart failure. The stricken Neena is helped through this loss by Dilip, whom she rewards by making the manager and co-owner (with her) of her father’s corporate empire: a partnership that appears to Dilip (and to viewers) to promise a yet more consummate merger to come. But his hopes are dashed one day when Neena takes him to the airport to meet Rajan (Raj Kapoor), who has been away in London for several years, yet who is, it turns out, her fiancé and one true love. It gradually becomes clear that Neena’s allusions, in previous coy exchanges with Dilip, to being in love in fact referred to Rajan and not to Dilip.

However, such careless words, and the exchanges of looks that accompanied them, have had an unintended effect: Dilip is now hopelessly in love with Neena. The breezy, self-confident Rajan (an early incarnation of the narcissistic husband of Kapoor’s later SANGAM, which will repeat several motifs from this film, including a little wooing scene he performs here using a snakecharmer’s reed-pipe) is at first unaware of these complications, as is Neena herself, who considers Dilip merely a close “friend” (dost). But Dilip is sufficiently tortured by unrequited love to nurture the crazed hope that Neena may yet transfer her affections to him. When Neena and Rajan are finally married, Dilip can restrain himself no longer and, soon after the ceremony, confesses his love to Neena. The horror that this admission inspires in Neena appears to have multiple causes: fear that her husband may learn of Dilip’s love and suspect that she returns it; guilt over the realization that she has inadvertently encouraged Dilip; and dread of her own suppressed attraction (conveyed through her glances and body language) to the intense and sensual Dilip. She attempts to tell her new husband about Dilip’s confession, but Rajan misunderstands her and cockily changes the topic (as always, he thinks she is talking about him!), and the frustrated Neena resorts to various forms of denial: repeatedly professing her love for her “only God,” Rajan, fleeing with him to Shimla and refusing to return to Bombay, and stubbornly urging Dilip to marry her own girlfriend Sheela (Cuckoo), who is herself in love with him. Though uninterested in Sheela and desperate to leave, Dilip remains in Bombay running Neena’s business out of concern that an abrupt departure on his part, so soon after her marriage, might tarnish her reputation. He remains, too, in Neena’s consciousness, haunting her dreams and slowly chilling her relationship with her husband. When a daughter is born to the couple, Neena becomes troubled by Rajan’s adoration of her, fearing that he too, like her own father, will “spoil” the child’s character with excessive indulgence and freedom. Dilip waits until the baby’s first birthday for his own exit, concealing a note to Neena (explaining that he now understands that, as an "Indian woman," she can have only one man in her heart, and that is Rajan) inside a toy he presents as a gift. A power failure during the party affords an opportunity to Neena to give a verbal message to Dilip, likewise begging him to leave, but in the dark she accidentally addresses her own husband with what Rajan now mistakes for a profession of love for Dilip. It’s all downhill from here, as Rajan’s insane jealousy provokes him, through several bouts of grandiose self-pity and biting sarcasm, to frustrate every effort by both his wife and Dilip to clear the record. Eventually, he attempts to kill Dilip with a blow to the head; the resulting concussion causes Dilip to go temporarily insane and to threaten Neena, both violently and sexually. Assailed, in effect, by two madmen, Neena commits a desperate act, resulting in her arrest and dramatic public trial. 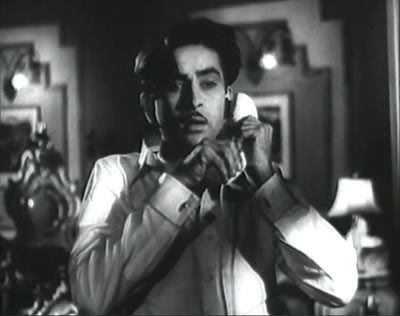 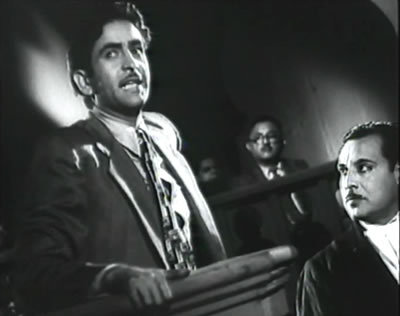 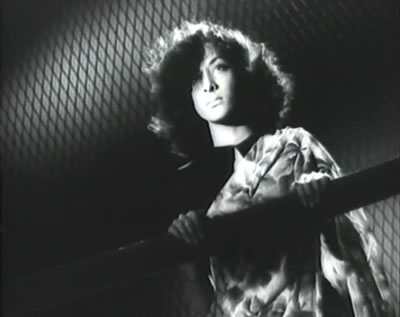 Within this grim story, diversion of a sort is provided early on by one Professor Devadas Dharamdas Trivedi (a.k.a. "D.D.T."), a bogus academic with a childhood link to Rajan, who insinuates himself into the household as a freeloader. Trivedi is a classic vidushaka (the comic sidekick of the hero of classical and folk theater): a dim but pretentious Brahman with outspoken opinions and uncontrollable appetites. Here he functions especially effectively as an exaggerated mirror image of the principal characters: like them, he is a creature caught between worlds, wearing a western style suit and solar topee, yet spouting Sanskritized Hindi and denouncing the decadent “foreign” lifestyle of his hosts, even as he greedily partakes of it.

Although voyeuristic delight in the westernized lives of the rich was (and remains) standard in Bombay films, Mehboob seems to dwell with particular intensity on surface signifiers of stylish modernity: Neena’s bob of permed hair, which she languorously fondles while talking to Dilip, her English-style boudoir and lap dog, and the Shimla round of horseback riding, tennis, and big-band soirees. The culturally corrosive effect of such amenities, earlier (hypocritically) decried by the buffoon Trivedi, is (even more ironically and hypocritically) declared by Rajan in his self-pitying speeches during Neena’s trial. Indeed, although Neena is ultimately driven to commit an act of violence, her real “crime” (apart from being involved in a series of misunderstandings, coincidences, and mistimed communications) appears to be her taste for "style". The film implies that there is a slippery slide from such taste to a disastrous non-adherence to norms of feminine modesty and non-assertiveness (displayed in Neena's repeated expressions that she doesn’t care what “worldly people” think about her behavior), and her error in boldly supposing that it is truly possible for a young woman to have a young man as a close “friend” (dost) without him and others getting the wrong idea.

Though the film appears to endorse Neena’s father’s often-recalled warnings about girls keeping within decorous limits, Rajan’s insufferable self-centeredness suggests just how much "good" Indian women may have to put up with (his assault on Dilip follows the latter’s—patently correct—assertion that Rajan has never really understood his own wife). And though the film is at pains to maintain the purity of Neena’s friendship with Dilip (which will eventually be distorted, by Rajan and society at large, into the manipulations of a lustful temptress), it also hints at the possibility of underlying erotic attraction, playing on the often sensually charged word dost. Rajan finally learns—when it is too late—the truth about Neena’s relationship with Dilip, and so presumably has to face his own measure of guilt. Indeed, there is guilt aplenty in this haunting, complex film, which ultimately implicates itself, and all its viewers, in Neena’s “crime”: succumbing to the irresistible attractions of alien “style” (and its attendant promise of new kinds of freedom, especially in male-female relationships), while maintaining the pretext of unwavering loyalty to an assumed “Indian tradition."

ANDAZ boasts a very strong score with ten songs, mainly sung by Dilip and Neena. In addition to the two mentioned earlier, memorable tunes include Dilip’s romantic Tu kahe agar (“If you but say…”), his melancholy ode to Neena and Rajan’s wedding, Toote na dil toote na (“Don’t break, O my heart”), and Neena’s mournful chronicling of Rajan’s gradual rejection of her in Uthaye ja unke sitam (“Take away his oppression”) and Tor diya dil mera (“He has broken my heart”).

[The Gurpreet Video International (GVI) DVD release of ANDAZ offers a decent quality print of the film with good sound. Superior-quality subtitles accompany the dialog, but unfortunately none are included for the songs.]