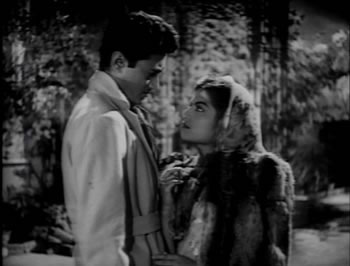 Despite the poor quality of its marketed DVD version (see final note below), this Bombay noir marks the directing debut of Guru Dutt and is worth seeing as a precursor of his later masterpieces. His fine cinematic eye for (especially dark) atmosphere is evident here despite often cheesy sets, and creates a fitting mood for a clever and suspenseful tale (co-written by Dutt and celebrated actor Balraj Sahni) of innocence and betrayal in the urban jungle. In a Hitchcockian gesture, Guru Dutt himself appears momentarily in the opening shots, as a cigarette-smoking beggar—an effective preamble to a tale of moral turpitude that will often be viewed through a heavy tobacco haze. 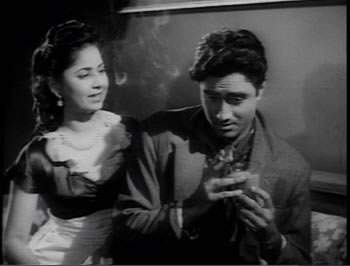 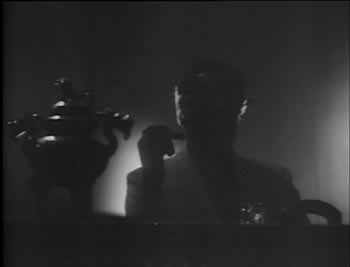 Madan (Dev Anand) is an out of work cabbie with a genius for gambling. He is spotted in a seedy dive by Pedro, an operative for the Star Hotel, a fashionable cabaret that conceals a subterranean casino. This den of iniquity is controlled from an inner sanctum by a shadowy underworld don who is seen only in backlit silhouette and referred to simply as “Master” (malik). Madan agrees to work for the don, luring gullible high-rollers into the establishment, because he is desperate to raise money (and too proud to accept charity) to pay for his kid sister’s treatment for tuberculosis. This puts him in contact with Rajni (Kalpana Kartik), the only child of a millionaire philanthropist, who has become a doctor and opened a dispensary in Madan’s slum. Though initially put off by Madan’s streetsmart attitude, Rajni quickly recognizes his good heart (it is implied that his family was once middle class, but has come on bad times) and the two fall in love—a process watched warily both by Rajni’s glowering father (K. N. Singh) and her would-be suitor, Police Inspector Ramesh (K. Dhawan), who also has his eye on the denizens of the Star Hotel. Another eye fixed on Madan belongs to Nina (Geeta Bali), the Star’s star dancer and the proverbial loose woman with a golden heart, who would like to flee her tawdry world with the handsome young hustler. The plot takes an unexpected turn when Madan accidentally learns the identity of his boss, who then attempts to silence him. Arrested on false charges of murdering Nina, Madan is condemned to be hanged, and the only person who can forestall this fate is his rival for Rajni’s hand, Inspector Ramesh. 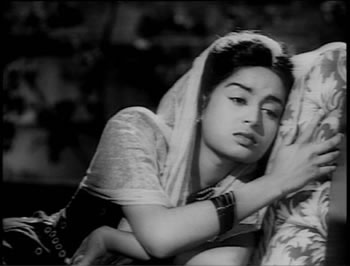 Apart from its often arresting photography, the film boasts strong and understated performances from all its principals. Dev Anand as the young hustler who has been wronged by a cruel world (a character he would recreate in other films; cf. TAXI DRIVER), effectively blends sensuality, bruised innocence, and melancholy. Kalpana Kartik and Geeta Bali both give nuanced portrayals of self-possessed and sexually mature heroines, avoiding the popular stereotypes of “good” and “bad” women. The film’s take on capitalism as inherently corrupt is well expressed in the don’s first speech to Madan, “Gambling is like any other business…in fact, one may say that gambling is another name for business”—and is borne out by the twists of the plot, which unfurl like the slowly rising smoke from Madan’s innumerable cigarettes. Burman’s score of eight songs is dominated by female voices: four are performed by cabaret singer Nina and three by Doctor Rajni. Madan has a single solo, Dil yeh kya chiz hai (“What is this thing called a heart?”), a jaunty and whimsical road song performed when he is trying to forget Rajni. Also notable is Tum bhi na bhulo balam (“Don’t forget, O Beloved”), sung by Rajni (who is unable to forget Madan).

[The Baba Digital Media DVD of this important film is regrettably flawed. The print used is of uneven but overall tolerable quality; however, it is marred by numerous abrupt cuts where frames have clearly been lost, creating momentary confusion (though one can still follow the basic storyline); several of the (unsubtitled) songs are badly butchered in this manner. Though enough survives to make this a must-see for Guru Dutt and Dev Anand fans, it would be a poor choice for exposing the uninitiated to these great figures of 1950s and 60s Indian cinema.]