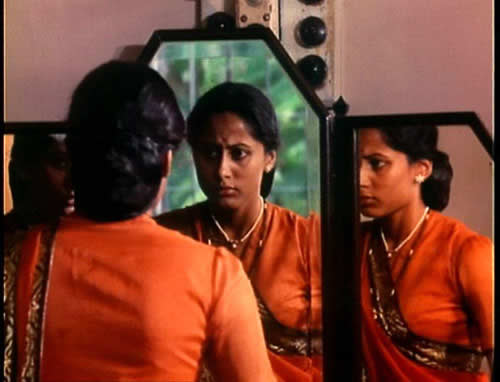 Shyam Benegal’s haunting and masterful film, based on the memoirs of a famous Marathi actress, explores the often tragic dilemma of the female entertainer in 20th century India, the “public” woman who moved freely in the social world and whose body was exposed to the desiring gaze of a largely male audience. The price for her “freedom” was that her “chastity” (meaning, in this context, her sexual fidelity to a single man) was constantly doubted and she was excluded (at least in the minds of many people) from the full respectability of the domestic woman, the gharwali or house-wife, whose life (ideally) transpired within the home and whose body belonged to her husband alone. This theme, explored in several mainstream “courtesan” films (PAKEEZAH, UMRAO JAAN), is here examined in the international neo-realist mode of India’s “parallel” or alternative cinema of the late 1970s, and with special reference to the popular cinema itself—the direct descendant of earlier performance genres that relied on the talents of singers and dancers who were themselves often courtesans. 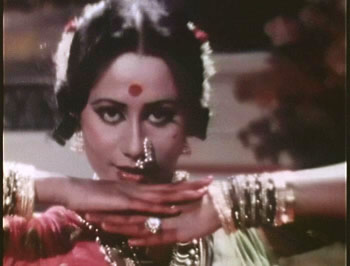 This genealogy is cleverly suggested by the credit sequence, in which the film’s heroine Usha/Urvashi (Smita Patil) dances suggestively in front of the lurid backdrop of what appears to be a small proscenium stage, such as that used in early 20th century folk theatre—the nautanki of north India, or the tamasha of Maharashtra—before a leering audience of turbaned men. Only at the end of this sequence (and just before director Benegal’s name appears in the credits) does the presence of an overhead camera and its operators reveal that in fact this is a soundstage set on which a film scene—presumably depicting an earlier theatrical milieu—is being shot. The shooting ends abruptly, with its pre-recorded “playback” music (which Usha has been lip-synching) grinding to a halt, when one of the backup dancers sprains her ankle: the first of many small but telling revelations of the human frailty—and feminine suffering—behind cinematic artifice.

The heroine’s two names are telling as well. Apart from the not-uncommon household name Usha (“dawn,” the name of a Vedic goddess), she also carries the stage name Urvashi, that of an apsara or celestial courtesan celebrated for her mythological seduction of a great king. In Hindu mythology, apsaras were dancing girls in Indra’s heavenly paradise; unmarried, and perpetually available for casual liaisons with men whom they (or Indra) might choose to tempt or favor; indeed, Indra used them regularly to keep the chastity-derived powers of saintly ascetics in check, lest they threaten his own cosmic dominance. In the ancient origin myth of Sanskrit drama, such celestial callgirls became the first actresses, and they also became the prototype of the vaishya or “professional woman” of classical and medieval times, the courtesan who was both a highly educated and glamorous entertainer and a potential mistress to well-to-do patrons. 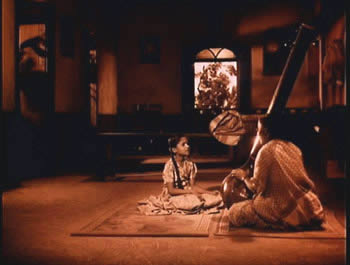 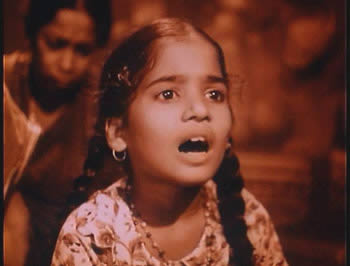 Usha’s life story unfolds through a series of flashbacks that begin as sepia-toned reminiscences of her childhood (and of the black-and-white era of Hindi cinema), which saw her first exposure to the camera as a “baby artiste” (well played by Baby Ruksana—the term “Baby” being a film industry label for a pre-pubescent child actress). Usha is the granddaughter of a famous female singer of the old tradition—evidently, a hereditary courtesan—whose own daughter rejected her lifestyle in favor of a hard-won “respectable” yet painful marriage to an abusive and alcoholic brahman. Following his early death, and over her mother’s objections, Usha is taken to Bombay by family hanger-on Keshav Darvi (Amol Palekar) to successfully audition as a singer in a Bombay studio: the first step in a process, watched approvingly by her doting grandmother and with horror by her mother, that will eventually carry her to on-camera adolescent stardom, and to an ill-starred “love marriage” with Keshav. Usha’s motives for stubbornly pursuing this relationship (culminating in a pre-marital pregnancy) with the unattractive and much older Keshav—who appears to have lusted after her since childhood—are not spelled out. Presumably she feels indebted to him for his loyalty to her family (of which he frequently reminds her) and for her own worldly success; she is also a headstrong girl who clearly enjoys her acting career and is bent on challenging her uptight mother (who opposes the match because of Keshav’s non-brahman status, just as she opposes the cinema itself on the grounds of its supposed disrespectability). 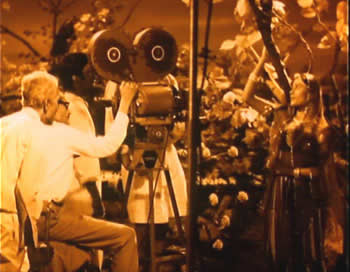 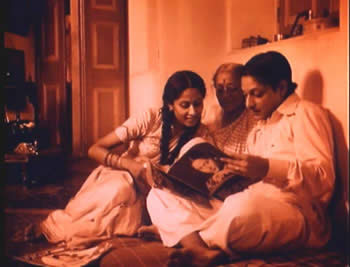 Once the two are wed, Usha is shocked to find Keshav continuing to act as her “business manager,” arranging starring roles for her opposite hunky heartthrob Rajan (Anant Nag), who is himself in (unrequited) love with her. Since Keshav’s other business ventures are unsuccessful, the family remains entirely dependent on Usha’s earnings—a fact that Keshav clearly resents. He thus becomes both a jealous husband with a fragile ego and nasty temper, as well as (in effect) a greedy pimp who compels his wife to take risqué work despite her dislike of her costar and her protests that she “only wants to be a housewife” now that their daughter has been born. Not surprisingly, the relationship becomes increasingly poisoned, particularly by Keshav’s assumption (fed by star-magazine gossip) that she is in fact having an affair with Rajan. Verbally and physically abused by her husband and periodically obliged to live in a hotel, separated from her daughter and mother, the desperately-unhappy actress eventually does instigate two unsatisfying liaisons—with the nihilistic and self-centered director Sunil Verma (Naseeruddin Shah), with whom she plots a double-suicide (which he foils), and then with the wealthy businessman Vinayak Kale (Amrish Puri), who keeps her as a pampered mistress on his palatial estate. Here Usha briefly finds a kind of “respectability” as a de facto second wife, earning a measure of love and admiration from Kale’s mother, son, and bedridden first wife—but (as she learns one day when she tries to take the boy to a nearby fair) at the cost of even the most rudimentary freedom. Unable to abide by Kale’s hypocritical domestic rules, she finds her only hope of escape to lie in the intervention of the hated Keshav, who promptly brings her back to a Bombay festooned with billboards of her own face, and to the same drab hotel and lonely prospects. As Kale’s bitter wife remarks to Usha as the latter prepares to leave, “The beds change, the kitchens change. Men’s masks change, but men don’t change.” 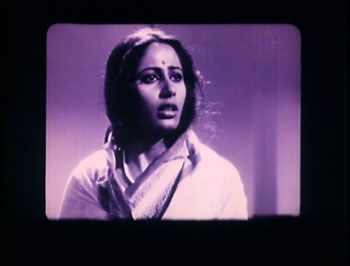 The film, which is at once about the history of popular entertainment in modern India and more broadly about gender relations under South Asian patriarchy, offers surprising insights on both fronts. As in the opening sequences of Benegal’s later, slicker, but less satisfying film ZUBEIDA (2000), the art-cinema director’s recreation of an earlier era of commercial filmmaking (with most of the action transpiring during the 1940s and ‘50s, the chronology being regularly reinforced by snatches of radio news broadcasts) reveals not merely the expected tawdriness and cynicism, but more than a little homage and nostalgia. This may be read as a tribute to a more innocent era and to the hard work and dedication of many of its undersung artists (including dance masters, chorus girls, and even lowly grips). Even the stock romantic songs, though used diegetically and ironically, are treated with affection (as in the scene in which Usha and Keshav begin to happily hum one of her recent hits). Needless to say, in this film Benegal especially pays homage to the talented but often troubled women who moved from courtesan-entertainer backgrounds to cinematic stardom. Their own love-hate relationship with the roles into which they were molded is echoed by Usha’s ambivalence about her career. Yet the film boldly proposes that the dilemmas of such public figures are more broadly akin to those of upper-class Indian women in general, whose patriarchally-mandated “role” of chastity and respectability may at any moment be scrutinized and held suspect by a misogynistic and leering gaze, and whose lives can become a “trial-by-fire” (agni pariksha, a reference to Sita’s famous ordeal in the Ramayana, and the name of the final film in which we see Usha acting). Such allusions, like the film’s repeated juxtaposition of mirrors and (male) gazes, effectively convey the message that women spend their lives being seen in ways and cast in roles that may not correspond with how they see themselves.

The film boasts superb performances all around, and is masterfully structured and paced—even a small vignette such as the scene in which Usha walks into an adjoining hotel room, drawn by the sound of her grandmother’s voice on a gramophone record, effectively enhances its wider theme, for the responses she receives from the two businessmen in the room (played by Mohan Agashe and Amrish Puri) convey twin aspects of the patriarchal gaze: desire and censure. Above all, of course, the film belongs to the late Smita Patil, actress extraordinaire, who convincingly transforms herself in its course from a vivacious teenage naïf to a wiser but deeply wounded middle-aged woman.

[The Video Sound DVD of BHUMIKA is of tolerable quality, with decent subtitles for dialogs and (intermittently) for song lyrics. However, although the print used appears to have been of good quality, digital image transfer seems to have been less than ideal, resulting in some blurring during the (many) sepia-toned and low-lit flashback sequences. This is unfortunate since the film displays artful cinematography by Govind Nihalani, who himself became a well known director.]