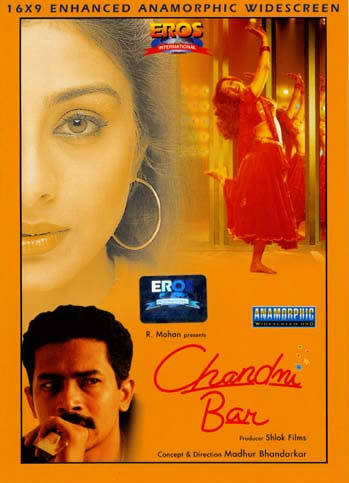 A modestly-budgeted, semi-art film that became a surprise hit in Bombay, CHANDNI BAR (“Moonlight Bar”) is a grimly realistic depiction of the life of a Bombay "beer bar" dancer, whose disreputable profession proves to be socially inescapable for her as well as her children. Through its explicit attempts at realism, CHANDNI BAR functions as something of an anti-Bollywood film, though it eventually includes some of the melodramatic elements of more popular films. Most notably, the film contains no song sequences: snippets of a few songs are heard on the soundtrack, but otherwise music is supplied by the film songs that are the backdrop for the bar girls' rather lifeless dances before their unsavory customers. As if to mark its distance from conventional films, the characters in the film frequently refer to famous Hindi movies and their stars, depicted as a world apart from these people and their hopeless lives.

In 1985, after her parents are killed in a communal riot in Sitapur (U.P.), Mumtaz migrates to Bombay with her uncle Ifran; their street-smart relative Iqbal takes them both to the Chandni Bar, where Mumtaz reluctantly goes to work as a dancer who must flirt with drunken men for tips. Though the girls who dance in the bar sometimes fight over customers, the film emphasizes their mutual support in the bar's back room where they wait to be called onto the dance floor. Although never fully resigned to her position, Mumtaz at least finds comfort and consolation among the abused and exploited women at the bar, which becomes a preferable alternative to a living space that is no kind of home. (The film emphasizes the bar's two worlds through repeated shots through the cracked glass window that separates the sad reality of the women's lives in the back room from the pathetic sexual fantasies they embody out on the bar's tacky stage.)

In the world of the film, every man is an abuser or, eventually, a potential pimp, willing to sell his wife, girlfriend, or relative, for a small price. Mumtaz's uncle, lamely claiming that he is seeking work, relies upon his niece's income and finally sexually attacks her. The film takes a melodramatic turn when the rising criminal Prothia (played by Atul Kulkarni with the menacing charm typical of movie gangsters) avenges and then marries Mumtaz, even though there seems to be no special emotion binding them; once Mumtaz has two children, their survival become her focus, though the continual underworld activities of her husband make it hard for her to become a conventional mother. As in most recent Hindi films set in the Bombay underworld, the police are as terrifying as the gangsters in their violence and abuse of power, and Mumtaz finds that her profession — while at least offering a steady income — and her husband's notoriety prevent anyone from respecting her or believing her word: in the final sequences, her attempts to raise her son Abhay and daughter Payal above her own lot in life are tragic failures, and even the otherwise supportive Iqbal is willing to broker Mumtaz's body and honor when money is needed to get the innocent Abhay out of a terrifying detention center. (In its treatment of a lone Indian mother's attempts to save her children, CHANDNI BAR suggests a cynical update of the 1957 classic tale of maternal sacrifice, MOTHER INDIA.)

Despite her futile attempts to preserve her honor and to protect her children, Mumtaz remains a frustratingly passive character, and although the film clearly wishes to engage the audience's sympathy for her plight, the suggestion that she is not to blame for, yet completely unable to direct her fate, creates a general situation without any apparent solution. The popular Tabu deserves credit for taking on an unconventional role and playing it realistically, and the directors deserve it for even making a film that focuses on a heroine — but for all that, Mumtaz is often a blank slate, her only strong emotion being anguish when the cruel world persistently abuses her. (In a way, she resembles the affectless character Satya, in the recent film of the same name, who is also swallowed up by Bombay's underworld after arriving from outside.) Although a notice at the beginning of the film declares that the filmmakers "have no intention to demean or insult this profession or their lifestyle," and that they "respect these girls and appreciate their struggle for sustenance through this profession," that respect doesn't apparently extend to any offer of hope. Whether or not the film's bleak conclusion seems honestly realistic or an easy way to avoid the film's social problems will be up to individual viewers.

[The Eros International DVD of CHANDNI BAR is of excellent quality and fully subtitled, even including the frequent profanities that comprise part of the film's realism.]