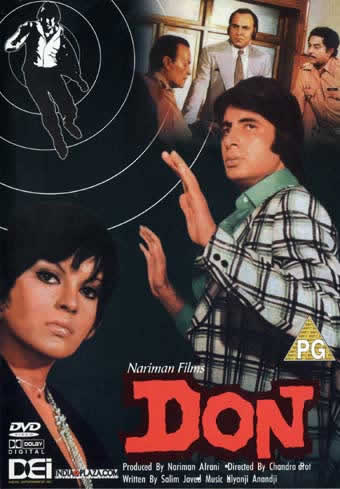 Although there are no lack of contenders for the title, this might just qualify as the Compleat Amitabh Bachchan vehicle. It has: international smugglers, subplots aplenty, jokes about Bombay, Banaras, and other films, uproarious action sequences (the credits include “Car Chase Driving: Haji”—who I believe was once my cabbie in Bombay), classic-villain Pran as a crippled safecracker who can walk tightropes, Zeenat Aman at her foxiest, several unforgettable songs, and a totally tongue-in-cheek (or paan-in-cheek) attitude about itself. Practically everything good in the film—and there is a surfeit—comes in doubles: exploding suitcases, Interpol agents, escapes from tall buildings via ropes that are severed, cute kids, lots of entendres, and Bachchan himself, who puts in stellar performances as both the Really Evil Goan crime boss “Don,” who sports killer shades and razor-sharp bell-bottomed suits, and Vijay, his happy-go-lucky desi doppelganger from the banks of the Ganga, who chews paan incessantly, puts surma (collyrium) around his eyes, wears a lungi, and dances on the pavements of Bombay with bells on his ankles to earn coins to support the street urchins he’s adopted. Okay, you see the possibilities here…but you don’t really, unless you’ve seen the film.

The plot is too complex to describe, but makes sense (mostly) when you watch it. Don is a kingpin in one of those sinister international smuggling rings that obsessed Bombay filmmakers in the 1970s (probably because they financed most films of the period). He’s wanted by Interpol, so badly that they have sent a fluent Hindi-speaking agent to look for him (a fact that should make the Bombay police just a tad suspicious, but doesn’t). Lots of other people are looking for him too, including D.S.P. (Deputy Superintendent of Police) D’Silva, and Roma (Aman), whose brother he murdered and who has acquired a black belt in karate and a slinky wardrobe for her mission of vengeance. Bachchan is way cool as Don, times deux, because Bachchan the Don is of course also “Vijay” the mobster in DEEWAR…so just for fun he is also “Vijay” here, except that this Vijay is a totally different sidha-sada (plain and simple) sort: a betel-chewing, Bhojpuri-spouting bumpkin, who looks just like Don and who rapidly steals the film from the smugglers.

Even if it lacked all this lunacy, and more (e.g., a motorcycle chase through the famous laundryman’s area, Dhobi Talab), the film would still merit seeing for two quintessential Bachchan song and dance sequences: Eeh hai Bombay nagaria (“This is Bombay City!”), shot at Colaba, Marine Drive, and Chowpatty Beach, and chock full of urban in-jokes; as well as the film’s biggest hit, Khaike paan Banaras-wala (“Chewing a paan quid from Banaras…really opens up the mind!”), which features a stoned-out Bachchan-Vijay (having quaffed a tall bhang- or cannabis-laced milkshake) sporting with a bunch of U. P. bhaiyyas and singing about being “a boy from the banks of the Ganges”—which, indeed, he is, hailing from Allahabad; give him a gamcha (the country scarf worn by Uttar Pradesh rustics) and his roots really show! Another Great Moment is the Pygmalion-like sequence of Bachchan-Vijay the simpleton watching a movie of Bachchan-Don the mobster so that he can method-act the classic Bachchan-the-movie star role. Vah, re vah! There is no apparent patriotism here and no piety; no weepy mothers, barely even any families— most of the characters are unmoored urban types. I don’t think there’s any Real Point either, apart frompyoor phun, and showing that all good things start with “B” (Bombay, Banaras, bhang, Bachchan), except possibly paan.

[The DEI brand DVD of DON is of excellent quality, and includes good subtitles for songs as well as dialog.]