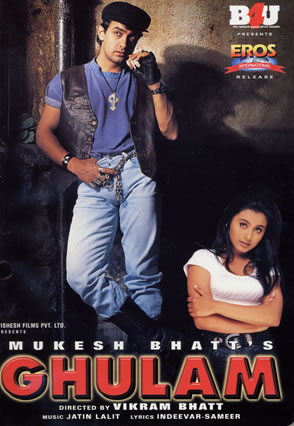 This well-made, high-end masala adventure takes the viewer through some unexpected twists and turns (and on some wild, don’t-try-this-at-home-kids motorcycle jaunts) before arriving at its not-unexpected conclusion. Siddharth Marathe or Sidhu (Aamir Khan) is a fast-talking, streetsmart Mumbai dude who makes his living through petty theft and boxing bouts, his carefree life marred only by memories of the fiery death of his father, a former freedom fighter. His brainier elder brother, Jai, works as an accountant and general aide-de-camp for Raunak Singh or “Ronnie” (Sharat Saxena), himself a former boxing champ. Now a mobster who rules the neighborhood like a feudal raja, commanding a pack of thugs who terrorize shopkeepers into paying protection money, Ronnie dreams of turning his “black” money empire to “white” as a big-time building contractor. Jai works tirelessly toward his master’s goal, while trying to keep Ronnie’s criminal deeds from attracting police or legal reprisal. The amoral Sidhu is an occasional hireling of his brother’s boss, until he meets an idealistic neighborhood social worker named Hari who is trying to bring Ronnie to justice. He also encounters, while tearing about on his brother’s motorcycle, the gorgeous Alisha (Rani Mukherjee), a high-rise Mumbai princess who is smitten with bikers—like the hard-core Charlie (Deepak Tijori) and his daredevil gang (which includes a swish hijra). Doesn’t all that black leather get a bit sticky in the sub-tropical heat? You bet, and so does a whole lot of other form-fitting fetishistic clothing, especially when, as often happens, it rains hard. This helps not a little to fan the flames of the pleasingly palpable chemistry between Mukherjee and Khan, though the latter’s trademark gamin—a kind of cross between Kapoorean clown and Bacchan-esque angry young man—always retains a streak of innocence (cf. RANGEELA, RAJA HINDUSTANI), especially when he is being beaten to a pulp (another frequent occurrence).

The film seems indebted to the iconic Brando and Dean classics THE WILD ONE and REBEL WITHOUT A CAUSE, though perhaps via later Hollywood clones, and more obviously to ROCKY (which was popular in India), but its fine cinematography capitalizes on superb Mumbai locations that anchor it squarely (if surreal-ly) in India’s big, bad Apple—a congested town in which a real-life Charlie would be hard-put to find a draggable strip. Four decent but forgettable songs orbit around a single catchy hit, “Aati kya Khandala” (“Whaddaya say we go to Khandala?”) in which the hero invites his girl to the nearest hill resort while they dance in a cleverly-lit kiddie park (the versatile Khan does his own playback singing on this number). The film’s flirtation with a social message—that “the people” must rise up to overthrow oppression, aided by idealistic social activists and an uncompromising lady lawyer—is predictably reduced, by the final reel, to the transformed hero’s single-combat with Ronnie, with the once-wild heroine (de-biked and increasingly domesticated as the film proceeds) gazing adoringly but passively from the sidelines. But if the brothers Bhatt steer clear of any formulaic or ideologically transgressive roadbumps, they nevertheless provide a consistently stylish and entertaining ride.