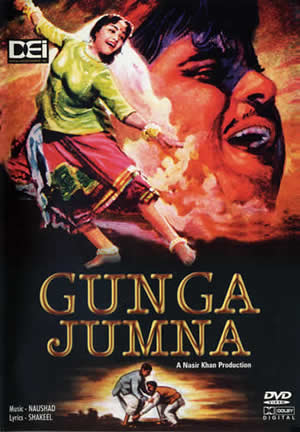 Despite its lush Technicolor tints, this big-budget film, scripted and produced by its star, Dilip Kumar, is a rural tragedy that presents a darker variation on some of the themes featured in Mehboob Khan’s classic, MOTHER INDIA (1957): the poignancy of two brothers on opposite sides of the law, the lingering grip of feudal oppression in rural India after Independence, and the struggle to reconcile family loyalty and personal justice and revenge with the implacable law codes of the modern state. By focusing its story and its audience’s sympathies on the brother who goes astray, however, the film invites a critical and pessimistic appraisal of the state’s ability to protect the underprivileged, and its tragic central character thus anticipates the “angry” proletarian heroes popularized by Amitabh Bachchan in the 1970s (e.g., the latter’s influential DEEWAR, 1975).

The boys Gunga and Jumna, named for the two great holy rivers of north India, are the sons of poor widowed Govindji (Leela Chitnis), who slaves away in the mansion of the local zamindar or feudal landlord, assisted by Gunga, the elder son. Bright-eyed Jumna is sent to the village school, where he imbibes inspirational lectures about the New India, in which citizens shoulder civic responsibilities and enjoy wonderful opportunities, in the form of the song Insaaf ki dagar (“the path of justice”). Ironically (and this is typical of the film), close-up shots of the smiling, singing schoolmaster and children praising the New Order are juxtaposed with pathetic images of Govindji and Gunga laboring painfully under the Old; clearly, the democratic dispensation has not reached everyone (and in fact, reading between the lines, it is the continuing exploitation of the poor that makes middle-class mobility possible). To make matters worse, the zamindar’s wastrel brother-in-law, Hariram Babu (Anwar Hussain), steals his own sister’s jewelry while she is bathing, discarding its gaudy box on a dung heap where it is found by Gunga. It turns up when police, alerted by the shrewish sister, search the boys’ home, and Govindji is arrested, a disgrace that proves too much for her.

The orphaned boys grow up, with Gunga (Dilip Kumar) now working hard for the fast-talking Kallu Lala, the Munim or village accountant (Kanhaiyalal, playing a comic mercantile-caste role, similar to the avaricious Sukhilala he portrayed in MOTHER INDIA), and continuing to finance the education of Jumna (Nasir Khan, Kumar’s actual brother; the more popular actor had assumed a Hindu name in the troubled aftermath of Partition. Regrettably, both men look about a decade too old for the roles they are playing.) Though he now studies in the city (coming and going by the inevitable railway), Jumna still loves his primary school sweetheart, the zamindar’s daughter Kamla. Yet when, against her wishes, she is betrothed to another, Jumna refuses to intervene, since he is still unable to support her in a manner befitting her social status. The pathetic scene in which Kamla, during a stormy night, comes to beg him to elope with her, establishes Jumna as a disciplined but inhuman paragon of social propriety — an object of simultaneous admiration and disapproval — and sets the stage for the eventual showdown between the two brothers. In contrast, the earthy but self-confident Gunga talks back to the zamindar and to everyone else, especially to low-caste village belle Dhanno (Vyjayanthimala), with whom he has a long-term teasing relationship that blossoms into love when he saves her from being molested by Hariram. The latter has now assumed control of the estate on the old zamindar’s death, and seeks revenge on Gunga by framing him on a charge of theft, sending him to prison, and eventually driving him out of the village and into the hills, where he joins a band of dacoits. Dhanno, who knows his innocence, follows him into exile and they are eventually married by the kidnapped village priest. Meanwhile, in the city, when the fraternal stipends stop coming in the mail, Jumna nearly starves until he is befriended by an idealistic policeman who convinces him to join the force. His first posting, naturally, will be to his hometown of Haripur to stamp out a notorious band of dacoits…..

On the long road to tragedy there are plenty of diversions. Linguistic coding is artfully used, with Gunga and Dhanno’s raucous arguments in colorful Bhojpuri dialect contrasted with Jumna’s carefully-measured pronouncements in Khari Boli or “high” Delhi speech. Rural life is also celebrated in exhuberant songs and dances (Naino ki dor, Aja ghar aja) and in a wonderful scene of a kabbadi tournament — a rowdy village game somewhat resembling American football. The sweeping landscape of the Deccan, with its arid mesas and lush green valleys forms a gorgeous backdrop to many scenes. Its sun-dappled sweep effectively counterpoints the dark ironies of Kumar’s ultimate vision: that the impartial “justice” of the modern state may triumph at the expense of those most in need of its protection.

The DVD of GUNGA JUMNA issued by Digital Entertainment Incorporated (DEI) is of good quality; songs are unsubtitled.

[For a sensitive analysis of this film and of the career of its producer and star, see Ziauddin Sardar’s essay, “Dilip Kumar Made Me Do It,” in Ashis Nandy (editor), The Secret Politics of Our Desires (Delhi: Oxford University Press, 1998), pp. 19-91. The film is discussed on pp. 40-45 of the essay.]