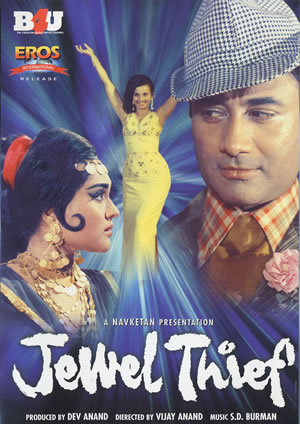 Before there was an Angry Young Man, there was a suave older one — Dev Anand, who himself went from playing scrappy proletarian roles in the 1950s (e.g., TAXI DRIVER, 1954) to become the Cary Grant of the color-saturated '60s in Bombay cinema. In this particularly glittery fantasy, he plays Vinay, a soft-spoken gem assayer and son of the Police Comissioner of Bombay, who is repeatedly mistaken for one Amar (nicknamed "Prince"), the head of a notorious All-India gang that has pulled off a daring string of jewel heists. Such dual identity, and his debonair good looks, give Vinay/Amar no small appeal to ladies, ranging from the principal ingenue Shalini (Vyjayantimala), to the spoiled and seductive boss's daughter (Tanuja), to the inevitable Anglo-Indian nightclub dancer (Helen)...and on to two more; they all eventually come together in a harem-like Himalayan hideaway that might have been fantasized by Fellini. There is no way to summarize the story without giving away details of a Byzantine but engrossing plot with Hitchcock-like pyschological overtones (and camera angles), beyond stating that viewers (like Vinay himself) are led to become confused as to his identity, and that the principals eventually move north-by-northeast to Gangtok, the capital of the tiny mountain kingdom of Sikkim for a suspenseful and spectacular showdown during the oriental-kitsch coronation of its crown prince.

A cavalcade of mostly frothy musical numbers nicely counterpoint and prolong the growing suspense. The opening song, Yeh dil na hota bechara, makes an updated homage to that of Kapoor's (much-quoted) SHRI 420 (1955), with the carefree hero strolling through an identical Deccani landscape and eventually feigning unconsciousness to score a ride (the refrain declares "my footsteps are not awara [vagrant, vagabond]") -- though, significantly, the Tramp/Raju is here transformed into the nattily-dressed cosmopolitan Vinay (with a surreal fishing rod on one shoulder), and the Big Car that picks him up is a powder-blue convertible filled with bouffant-coifed beauties. Though we learn from the story that Vinay is in fact fishing-for-a-job with the father of the driver, any sense of class difference is airbrushed over with a superabundance of shared Style. High Modernity really runs amuck in interior sets, which are littered with curvilinear coffee tables, skylit cathedral ceilings, and stained-glass lamps, all awash in lurid colors. Vinay/Amar sports a corduroy suit and dapper tweed cap, while the ladies in his life prefer spray-on gowns, sprayed-up hair, and (of course) heaps of jewels.

Yet even amidst such carefree visual delights, the Nation looms inescapably in the background; literally, during an early high-level briefing on the Jewel Thief's escapades, when a giant relief-map looks down on a boardroom of officials who vow to apprehend the wily criminal by January 26th, the date of the royal function in Sikkim (but more significantly, India's Republic Day). And though we are not yet in the era of traitorous high-stakes smuggling across the Persian Gulf, the criminal Prince does plan to flee overseas in his private jet, and national (and paternal) honor clearly requires that Vinay catch his dastardly double before he takes his vast loot outside the country. And of course, the means to this end necessitates the imperso-nation (borrowing Sumita Chakravarty's insightful pun) of evil Amar by virtuous Vinay...that is, unless they are one and the same person....