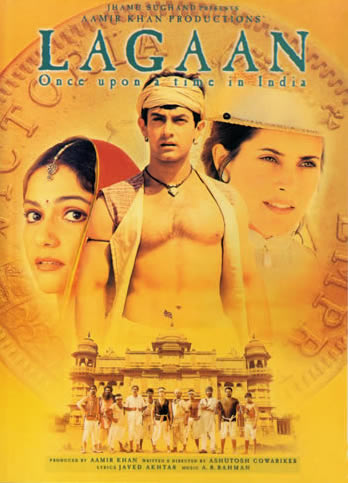 “Cricket,” wrote cultural theorist Ashis Nandy, “is an Indian game accidentally discovered by the English.” In his only-partly-whimsical 1989 book, The Tao of Cricket, Nandy develops this insightful if contra-historical sutra into a lengthy analysis of what he sees as the three great public-arena obsessions of contemporary India: cricket, politics, and the Bombay cinema—further arguing that all three adhere, in significant ways, to the same basic grammar of performance. Whether or not he ever read Nandy, director Ashutosh Gowariker had the genius to combine all three in one allegorical package, and to sell the idea to Aamir Khan, who then produced and starred in the resulting screenplay. The rest is cinematic history, and also one of the most successful Indian efforts at historical cinema: an epic-length (nearly four hour, yet surprisingly well-paced and gripping) parable in which the indigenization of cricket becomes a metaphor for the entire Indian Independence struggle, as well as for the larger and still-ongoing project of (to quote another book by Nandy) the “loss and recovery of self under colonialism.”

A prologue intoned by a Godlike narrator (Amitabh Bachchan, naturally), sets the scene in 1893, in “Champaner, a small village in the heart of India.” The location is deliberately vague—though shot in the Kutch region of Gujarat, the film projects a kicheree of north and central Indian architecture, dress, and dialects, with the obvious intent of establishing an archetypal Every-gaon. The villagers are depicted groaning under the weight of the exhorbitant lagaan or crop tax, paid to their local Raja but then largely appropriated by the rapacious British, personified in the sadistic and capricious Captain Andrew Russell (Paul Blackthorne), who reigns over both ruler and ruled from a palatial cantonment. Russell is fond of dares and wagers, always with the object of humiliating Indians and forcing them to adopt British habits, as when he challenges the vegetarian Raja Puran Singh of Champaner (Kulbhushan Kharbanda) to eat meat in order to obtain tax relief for his suffering subjects; though the Raja’s heart bleeds for the wretched prajaa, he steadfastly refuses to violate hisdharma, and earns the sympathy of Russell’s newly-arrived sister, the lovely Elizabeth (Rachel Shelley). This episode, only a few minutes into the film, typifies its manner of distilling two centuries of colonial encounter into a few broad gestures, necessitating a somewhat free hand with history and politics. So does another early scene in which the hero Bhuvan (Aamir Khan) attempts to save forest animals from the relentless sport shooting of cruel Captain Russell. The representation of the Raja as a benevolent and paternalistic dharma-king elides the fact that most princely rulers were no less exploitative than their colonial overlords, with whom they worked comfortably and closely. Most were meat-eaters as well, and much addicted to hunting, for which many kept their own well-stocked reserves, strictly off-limits to their subjects (and which, in some parts of the country, were later plundered in an orgy of post-Independence animal-slaughter and tree cutting by real-life Bhuvans). The film is not interested in such factual subtleties, however, and in suggesting that feudal landlords were pious nationalists and natural allies of peasants in the battle against a demonized foreign foe, it slips into the jingoistic terrain of popular historiography.

Its progressivism lies elsewhere. When Captain Russell doubles the tax assessment despite a second year of drought, the villagers beg for relief. He then proposes that Bhuvan assemble a cricket team to defeat his own eleven at the imperial khel, a pastime that Bhuvan has earlier mocked as a variant on the humble stick-game of gilli-danda played by village boys. If the Champanerans can win a three-day match, Russell promises to cancel the lagaan for the entire province for three years; if they lose, the tax will be tripled rather than doubled. Over the protests of his comrades, Bhuvan accepts the challenge. The remainder of the first half of the film shows him slowly converting his reluctant neighbors into team players, aided by the simple faith of his village sweetheart Gauri (Gracy Singh) and his widowed mother Yashodamai (Suhasini Mulay), and then by the coaching of the sympathetic and cricket-savvy Elizabeth—a stand-in for Annie Besant, Sister Nivedita, Mira Behn, and other Memsahibs who took up the Nationalist cause—who of course also falls in love with him. His teammates include a politically-correct cross section of caste and ethnic types, all well portrayed: the brahman physician Ishwar (Sri Vallabh Vyas), the blacksmith Arjan (Akhilendra Mishra), the Muslim Ismail (Raj Zutshi), the slightly-mad soothsayer Guran (Rajesh Vivek), the hot-tempered Sikh Deva Singh (Pradeep Rawat), the mute drummer Bagha (Amin Hajee), and ultimately the sweeper Kachra (Aditya Lakhia), who is not only untouchable but also physically handicapped, with a limp hand that turns into one of the team’s secret weapons (he invents spin bowling). The scene of his acceptance into the team, championed by Bhuvan against the initial opposition of everyone else, is both moving and anachronistic, prefiguring by decades Gandhi’s efforts for Harijan uplift, but also hinting at the real-life struggle and consciousness-raising impact of cricket-playing Dalits in Bombay in the early twentieth century.

The second half of the film is dominated by the match itself, which is further allegorized into a veritable history of international cricket, including not only the invention of the spin ball but also of the notorious bodyline tactic (actually introduced by Douglas Jardine against Australian players in the 1930s). The game is shown in sufficient detail that American viewers unfamiliar with it can easily pick up most of the relevant rules, though they will miss many details accessible to aficionados. The director manages to keep tension high through predictable yet effective devices: thousands of Kutchi extras on nearby hills exult or mope, as required; the brooding Lakha (Yashpal Sharma), who is Bhuvan’s rival for Gauri’s hand, offers his services to Captain Russell as on-team saboteur, but eventually Does the Right Thing; the ragtag village team trails badly at the end of the first day of play, and appears headed for a trouncing by the end of the second. How they manage to turn it around on the third, led by the batting partnership of sturdy yeoman and crippled untouchable (thus anticipating the political alliance of “Backward Castes” and Dalits in late 20th century elections), should keep viewers on the edge of their seats, if not actually biting their nails, before the rousing and rain-drenched finale.

Despite its clichés, the film is stylish and intelligent throughout, and the solid Rahman-Akhtar songs use many traditional instruments and themes, from the pounding, rain-summoning monsoon dance Ghanan ghanan (“dark and dense [come the clouds]”) to the coy song of Radha’s pique with Krishna, Radha kaise na jale (“Why shouldn’t Radha be jealous?”), danced by the peacock-feather wearing and fluteplaying Bhuvan along with Gauri and the village girls. Elizabeth’s budding and transgressive love for Bhuvan allows an English-language lovesong to interweave with the village lovers’ romantic duet O rey chhori (“O sweet girl”), while she fantasizes waltzing with Bhuvan at a cantonment ball. A feisty, patriotic anthem, Chale chalo (“Let’s go forward!”) accompanies the team training of the Champaner eleven, which manages to interweave sweaty teeth-gritting workouts (think a Nike ad with dhotis) with serene mountaintop hatha yoga sessions (think Eternal India and Saffronization). Indeed, there is scarcely a button available that this film doesn’t push, but usually so deftly and ingeniously as to delight one all the same. When the dust finally settles and someone—I won’t say who—wins by a single point, you should feel ready to dance in the street, or go to bat yourself for some underdog.

Lagaan cost a whopping Rs. 25 crore (250 million rupees, or roughly 6 million U.S. dollars), a huge risk for the seldom-profitable Bollywood genre of historical film. However, it is said to have achieved the unprecedented coup of recovering virtually its entire cost from the sale of music and overseas rights even before its release; it went on to become one of the biggest hits of 2001, and only the third Indian film (after Mother India and Salaam Bombay) to be nominated for a U.S. Academy Award.

Despite its length, the film could serve as a good introduction to contemporary Indian cinema for novice Western viewers, and also could be useful in courses examining the modern history of the Subcontinent and its ongoing and contested interpretation. The Columbia-Tristar DVD is of adequate (though not exceptional) image quality; however, it has good quality subtitles throughout, for songs as well as for dialogue segments.

References:
Ashis Nandy, The Intimate Enemy: Loss and Recovery of Self Under Colonialism. Delhi: Oxford University Press, 1983.
Ashis Nandy, The Tao of Cricket, On Games of Destiny and the Destiny of Games. New Delhi: Penguin Books, 1989.