This is less a “sequel” to 2003’s successful comedy, MUNNA BHAI M.B.B.S., than a reworking of its essential plot—about a lovable petty thug wooing a woman of higher educational and social status through an elaborate masquerade that is threatened by authority figures, yet ultimately triumphing through his qualities of emotional openness and “heart.”  Both films use sumptuous cinematography and the (now) usual digital tweaking to make Mumbai appear a candy-colored consumerist utopia—Miami's South Beach with an occasional god-poster.  Both feature inventive sight-gags and many of the same actors, and both, despite their visual overload, also rely heavily on rapid-fire and deftly-delivered dialogue in substandard (but now, and partly through these films, increasingly standard) tapori Hindi peppered with English words and phrases to convey the infectious charm of the main characters:  Munna (“kid”), a hulking yet boyish bhai(literally “brother,” but “hoodlum/gangster” in Mumbai slang, played by Sanjay Dutt), and his compact, resourceful sidekick and majordomo, “Circuit”/Sirkeshwar (Arshad Warsi).  The versatile Boman Irani, who played Munna’s comical nemesis, the bald and high-strung Dr. J. C. Asthana, in the first film, reincarnates in the comparable slot here—this time as a hirsute, paunchy, and thoroughly corrupt Sikh real estate developer, Lakbir/“Lucky” Singh.

Jimmy Shergil returns as yet another sad-eyed young man—no longer a Muslim boy dying of cancer, but a guilt-stricken Goan who has lost his dad’s nest-egg on the stock market.  Suman/“Chinki,” the young medical student whose wooing by Munna largely drove the plot of the first film and who he apparently wed at its conclusion, has vanished without explanation, being replaced by another gorgeous and unattainable heroine:  the call-in radio DJ, Jhanvi (per the English subtitles, although this name, an epithet of the Ganga River and goddess, would be more correctly transliterated Jahnvi), played by Vidya Balan, an actress who, like Gracy Singh in the first movie, could easily be actor Dutt’s daughter.  Since Munna’s parents, who similarly loomed large in the original film, are also gone (though the audience, of course, understands, that Sunil Dutt, the star’s real-life father and his fictional dad in the earlier movie, passed away in the interim), it is as if we are presented, à la the Hindu purana narratives, with a Munna Bhai avatar in an alternate universe or a differentkalpa (cosmic time cycle)—moving amidst the same basic circle of role-players and repeating the same salvific mission (to improve himself and better the world through somewhat loopy “love”), but with minor variations—perhaps to avoid divine boredom.

But what works for (Hindu) God doesn’t often work for filmmakers, and the formulaic plotline here might seem like a recipe for a dud sequel—and yet, LAGE RAHO MUNNA BHAI scored an even bigger box office success than its precursor, rivaling RANG DE BASANTI for the status of the most-acclaimed and most profitable film of 2006, and garnering four Filmfare awards.  The explanation for this, I propose, lies partly in the Munna-Circuit chemistry and linguistic hijinks—which are easily satisfying enough for two movies (a planned third installment was on ice in 2007 because of Sanjay Dutt’s imprisonment on a charge of possessing illegal weapons and possibly supplying them to gangsters-cum-terrorists), but also in another sort of appeal to the zeitgeist of contemporary India.   For the film’s major innovations are to shift the sphere of Munna’s emotion-dispensing avataric activities from the medical establishment of an allopathic teaching hospital to the realm of media (especially call-in DJ radio, one of the country’s new obsessions), and to replace Munna’s mother and her panacea-like jaadu ki jhappi (“magic hugs”) with a populist send-up of the Father (and, in his nurturing and androgynous way, also “Mother”) of the Nation, Mohandas Karamchand Gandhi, here as an avuncular apparition visible only to the hero—imagine (in American terms) a combination of, say, Abraham Lincoln and "Harvey" (the six-foot invisible rabbit shadowing Jimmy Stewart in Henry Koster’s celebrated 1950 film).

This is one of the more remarkable turns in the public re-appraisal of Gandhi-ji that began to be reflected, in a more serious register, in such fin-de-siècle films as HEY RAM (2000) and THE LEGEND OF BHAGAT SINGH (2002).  Munna’s “Bapu” (an endearing kinship term roughly equivalent to “Pops” or “Gramps”) has only a slight physical resemblance to the genuine article, but the impersonation is enhanced by costume and gait, and by dialogue that, at its best, suggests some of the sharp and self-deprecating humor for which Gandhi was known, as well as his quirkily principled interventions into the lives of his disciples.  Munna quickly dubs Gandhi’s nonviolent and truth-based approach to problem solving (known in formal Hindi as Gandhi-vaad or “Gandhi-ism, Gandhian ideology”) “Gandhi-giri,” using a suffix commonly applied, in Bombay slang, to words associated with criminal behavior (e.g., gunda-giri, “hooliganism, thuggery”).  This incongruous and hard-to-translate compound, linking an exalted surname with a rather disreputable term (“the Gandhi-racket” perhaps suggests something of the resonance) rapidly became, like much else connected with the film, a national sensation (more about this below). 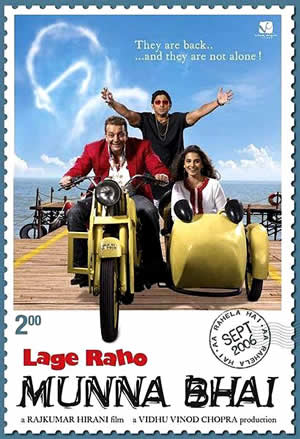 [The Eros DVD of LAGE RAHO MUNNA BHAI offers subtitles for both dialog and songs, but English-speaking viewers should be warned that these reflect translation decisions that are not always felicitous.  Although some of the translator’s ambitious efforts to render Munna & co.’s slang into comparable American idioms come off reasonably well (e.g., Munna’s constant vocative Mamu is rendered “dude”), others fail badly, producing highly misleading results.  The worst examples of these substitute (supposedly) equivalent American names and personalities for Indian ones, as when the names of moviestars “Shah Rukh Khan and Dilip Kumar” turn up in the subtitles as “Brad Pitt and [Robert] Redford,” or when clever Hinglish puns are replaced by irrelevant and less-than-clever English word-play.]