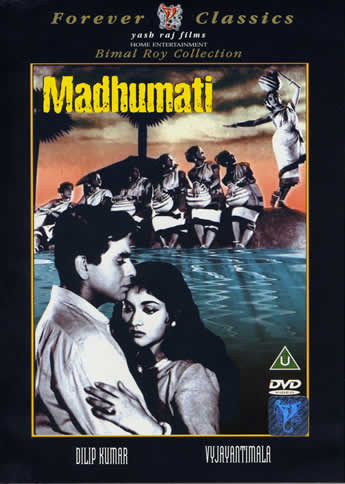 Bimal Roy’s most successful film and ostensibly his most blatant concession to mass tastes, MADHUMATI is an overdetermined but compelling mystery-romance involving reincarnation and a haunted mansion, set in the Himalayan foothills and ornamented with lovely (and famous) songs. It boasts a screenplay by famed Bengali director Ritwik Ghatak, and dialogues by Urdu novelist Rajinder Singh Bedi. The film begins, as they say, on a dark and stormy night, as Devendra (Dilip Kumar) and a companion are enroute through the rain-lashed mountains to meet a train carrying Devendra’s wife and child. When a landslide blocks the road, the two men take shelter in a ruined mansion, which Devendra finds unaccountably familiar – he knows his way around, and recognizes a portrait of the mansion’s former owner, Raja Ugranarayan, as his “own” handiwork. Soon he begins a long flashback to a previous life, in which he came here one sunny day as the young clerk and amateur artist Anand, to supervise the timber estates of the arrogant and cruel Ugranarayan (Pran). In his establishing song, Anand exults in the beauty of the mountain landscape and reveals his poetic temperament (Suhaana safar aur yeh mausam haseen, “a pleasant journey and this beautiful season”). Defying the Raja by venturing into a forbidden tract of forest, Anand falls in love with the vivacious and uninhibited Madhumati (Vyjayanthimala), the daughter of a local chieftain whose son was earlier murdered by the Raja’s henchmen. Anand’s own egalitarian progressivism, coupled with his sympathy for Madhumati and her family, soon sets him on a collision course with the Raja, who takes revenge through a malevolent scheme.

The story, punctuated by plenty of dark cloudbursts, sustains its suspense through complications that include a flashback within the flashback, a trainwreck in the frame story, and no less than three different embodiments of the heroine. Comedy is provided by Anand’s drunken servant Charan Das (Johny Walker), and Roy’s social-realist eye is apparent even in this fantastic setting, capturing plausible portraits of some of the laborers on the Raja’s estates. The film has affinities with Hitchcock’s REBECCA (1940) and VERTIGO (1958), and the initial meeting of hero and heroine closely resembles that of Raj Kapoor’s later RAM TERI GANGA MAILI (1984), wherein (as here), woman stands in for nature and unspoiled folk tradition and the villain for exploitative (capitalist) culture, with the hero as intermediary. The film’s eight songs include the haunting hit Aaja re pardesi (“Come, O stranger”), by which Madhumati first summons Devendra. Kumar gives an appropriately haunted performance as the two incarnations of Devendra/Anand, and Vyjayanthimala is alternately earthy and ethereal in the various permutations of the title character.

[The Yash Raj Films DVD of Madhumati includes subtitling for the songs, and offers a viewable but less-than-ideal print of the film. That better copies survive is apparent from one of its bonus features – a portion of a documentary about Bimal Roy by Nasreen Munni Kabir, which includes crisper and less-scratched footage from the film.]