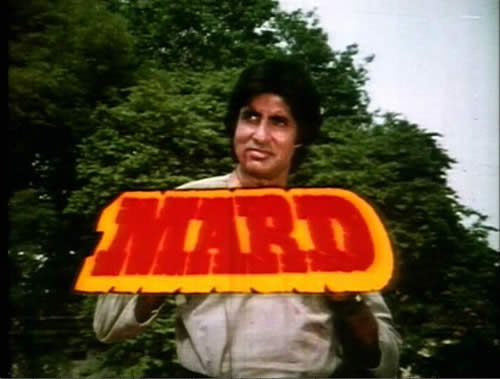 This film, which featured prominently in Pico Iyer’s smug dismissal (in Video Night in Kathmandu, 1989) of all of Bombay cinema as a tawdry simulacra of “Hollywood in the Fifties,” is in fact a little gem of the subgenre that might properly be coded M4MD—“manic masalamovies made by Manmohan Desai” (1936-1994), the exuberant stylist who gave us AMAR AKBAR ANTHONY (which MARD parodies during a hilarious party sequence) and COOLIE. These madcap action adventures, aimed primarily at proletarian audiences, update the beloved “stunt films” of earlier decades with tales of avenging superheroes (generally played by Amitabh Bachchan) who are often the lost sons of princes or magnates, happily relocated among the People. Working on a limited budget (much of which necessarily goes for tanks, explosives, and Bachchan’s salary) and making marvelously inventive use of everyday Indian objects (such as cycle stands, tongas, whips, and Karnataka State), Desai here crafts a nonstop-action fable that offers sixteen-annas (Hindi for the whole nine yards) of entertaining ingredients: the Big B, back (after his near-fatal injury during the filming of COOLIE) in kickass dishoom-dishoom form, perpetually-suffering Nirupa Roy as a traumatized mother who has lost the power to speak, evil “British” minions (to be further discussed below) enslaving the good folk of Hindustan, a spirited white horse named Badal (“cloud”) and a faithful Labrador retriever named Moti (“pearl”), both of whom are way smarter than any of the film’s numerous villains, and of course fights, fights, and more fights. 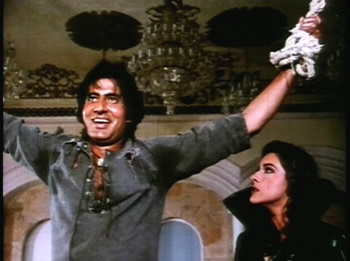 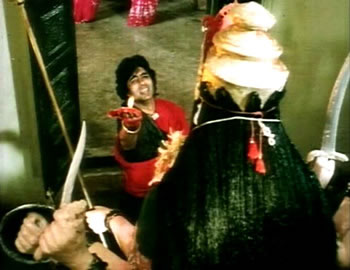 When lionhearted Raja Azad Singh (“free lion,” played by former wrestler Dara Singh, who himself starred in many stunt films) defies the British who are looting his land (carrying off brass idols that appear to have come straight out of Delhi’s Tibetan Market), they retaliate by seizing his kingdom, torturing and imprisoning him, and trying to kill his wife (Nirupa Roy) and newborn son. The queen escapes, but loses the infant—whose chest has just been scarred with the word “mard” (Hindi’s most macho noun for a male) by his proud papa—during a wild chase. The baby is adopted by a poor baker and his childless wife, and grows (all this, mind you, before the title is displayed…on Bachchan’s chest) into the carefree horsecart driver known as Raju Tongewala (“Raju the horsecart man,” Amitabh Bachchan), who scours the city looking for wrongs to right. This soon puts him on a collision course with its evil Anglo-Indian mayor, Sir Harry (Prem Chopra), who acquired his title and Indo-Saracenic palace by betraying Azad Singh to the Brits, and his buxom daughter Ruby (Amrita Singh) who is spoiled and cruel, but redeemable once she (inevitably) falls for the dashing cartman. When Sir Harry’s attempt to buy off the latter with a wad of “black money” only results in his own face being blackened, he resolves to quickly wed Ruby to General Dyer’s super-sadistic son Danny, who presides over a neo-medieval concentration camp where Indian slaves construct a railway, and then, when too weak to work, are bled to death to provide transfusions for British troops “in Burma." Extinguishing all this evil, plus reuniting the long-separated parents and son, will require extraordinary ingenuity, and Desai does not disappoint. Watch for (among many other diversions) a country wedding at which Raju and Ruby get the British stoned on hashish-laced milkshakes, and a Durga-temple sequence in which Raju performs the goddess’ arti using his palm as a lamp (accompanying the appropriately macho bhajan “O Maa sherawaali,” “O Lion-riding mother”). The final reckoning involves multiple disguises, impalements, and a bottomless quicksand quagmire. 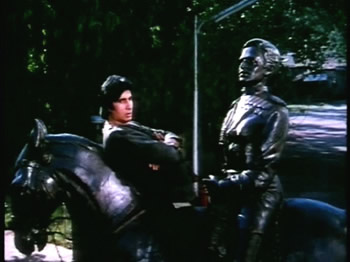 It seems at times that this is the ultimate postcolonial fantasy, a film so over-the-top that it makes LAGAAN look like a PBS documentary—as when the drunken Raju climbs onto an equestrian statue of former Viceroy Lord Curzon to negotiate the marriage of Curzon’s mare to Badal. There are also multiple allusions to the real atrocities and humiliations of the colonial period: the arch-villain, Harry’s boss, is named General Dyer (after the perpetrator of the Jallianwala Bagh Massacre in 1919), and there is a “Windsor Club” with the signboard “Dogs and Indians Not Allowed” (of course Raju will not only bring in his dog, but Moti will obligingly piss in the face of Dyer’s henchman Simon). Yet given the fantasy framework, chronological and locational ambiguity, and the fact that, with the exception of Simon and a bunch of other goras (white folk) cast as extras, the arch villains are all played by Indian actors, one may propose that the ridiculously evil firangis may as easily be read as stand-ins for the “brown sahibs”—the Indian elite of the long-running Congress Raj—who succeeded the colonial masters only to become associated with home-grown corruption and oppression. Their arrogant ways and brutal policies—speaking Hindi studded with English phrases, recklessly driving big cars through bazaars, lounging at poolside in clubs that ordinary Indians can never hope to enter, amassing hoards of untaxed “black money,” and promoting “urban beautification” through the bulldozing of shanty towns—are pointedly pilloried here, yet any overt critique of the ruling regime is deflected to the red-faced rakshasas of the recent past. Raju at one point mocks Indira Gandhi’s onetime election slogan (Gharibi hatao, “Remove poverty”) by asking Sir Harry (apropos of his program of slum demolition), “Do you want to remove poverty or just the poor?” This critique is expressed with surprising eloquence in the song Buri nazar wale (“You with evil eyes”), which uses homely abuse terms to pillory the heartless rich, and includes such verses as:

Many poor laborers lie
Buried beneath your palaces.
You have domes over your heads,
While we poor have shrouds.

[The Apollo Video Films DVD of MARD is of mediocre quality. Subtitles, though adequate, lose most of the saucy flavor of the dialogs, and none are provided for the six songs.]