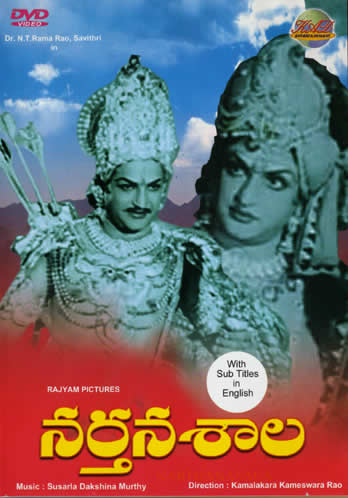 This classic Telugu mythological is essentially a dramatization of the playful but portentous Book Five or Virata Parvan of the epic MAHABHARATA, in which the five Pandava brothers and their common wife Draupadi, exiled from their kingdom for twelve years in consequence of a rigged dice match, must pass a thirteenth year of agyat vas or open but incognito living in some kingdom. If they are recognized during this year, they must begin a second 12-year cycle of forest exile. For this year of living dangerously, they choose the realm of the Matsyas, ruled by the goodnatured but weak King Virata, and select disguises that are oddly appropriate to their epic characters; the book ends with a ludicrous “rehearsal” of the larger epic’s cataclysmic battle, in which the (now undisguised) Pandavas easily defeat their Kaurava foes and then seal a marriage alliance with their Matsya hosts. This union, of King Virata’s daughter Uttara with Arjuna’s son Abhimanyu, will provide the Pandavas with powerful allies in their future fight to reclaim their patrimony. Moreover, it is blessed by Lord Krishna, Arjuna’s friend and mentor (and God incarnate), who alone knows that its issue, the boy Parikshit, will be the sole junior survivor of the coming carnage, and hence the dynast of the postwar future.

The film opens with Arjuna (played by legendary Telugu star N. T. Rama Rao, who later entered politics and became the Chief Minister of Andhra Pradesh) entering heaven to visit his divine father Indra. This episode (which occurred earlier during the Pandavas’ forest exile) sets the stage for the events of the Book of Virata by providing Arjuna with instruction in music and dance, and by placing him under a curse from the heavenly courtesan Urvashi to lose his masculinity and become a eunuch for one year. This provides the explanation for Arjuna’s subsequent choice of disguise during the Pandavas’ incognito life — as the transvestite dancing master Brihannala, who becomes the teacher of King Virata’s daughter, Uttara (L. Vijayalaxmi, displaying some fine Bharata Natyam skills). Rao manages the transition well, swishing about in glittery drag and affecting exaggeratedly feminine mannerisms (especially while handling such ironic questions as “Did you know Arjuna well?”). The most significant incident in the film is the attempted seduction of Draupadi (Savithri) by King Virata’s overbearing brother-in-law Keechaka (S. V. Rangarao, another famous actor), which results in his slaying by another Pandava brother, the strongman Bhima (Dandamudi Rajagopal), who is disguised as a cook and wrestler. Following his slaying (and following the Mahabharata text) Keechaka’s relatives atempt to burn Draupadi alive on his pyre as a sati — the scene, including a stake and chains, suggests The Passion of Joan of Arc — but they are likewise slain by Bhima. Krishna (Kantharao) appears periodically and is suitably charming, with an enigmatic smile.

A romantic subplot is provided by having the youthful Abhimanyu (Sobhanbabu), likewise in disguise, come to the kingdom in search of his fathers (ostensibly to warn them that the Kauravas’ spies are also looking for them) and fall in pre-marital love with the Princess Uttara. Humor is chiefly provided by Uttara’s boastful but cowardly brother, Uttara Kumar (Relangi), and by a group of bumbling Brahman cooks, slaving away under Bhima’s iron-fisted kitchen regime. The entire film unfolds in near-operatic style reminiscent of many genres of Indian folk theatre, with nine songs, and with characters periodically breaking into recitative at moments of high emotion.

(The DVD from KAD Entertainment includes the usual scene and song menus, and has decent English subtitles.)