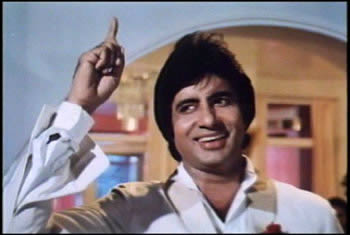 Although Manmohan Desai made a large number of masala blockbusters, this film is arguably his quintessential opus—even, perhaps, the meta-Manmohan film—because of its sheer pileup of the visual and narrative excess for which he is justly famous, and also because it constitutes a sort of paean to cinema itself, both Bombay-ishtyle (and especially Desai’s own) and phoren, all set in a glittering, faux-goldtone proletarian frame. Thus if, after the first breathless hour, you feel that you have witnessed a veritable synopsis of the clichés of a half century of international cinema, plus a cameo-cavalcade of nearly every superstar and character actor from the past couple of decades of Hindi film….well, you are right; moreover, that is just how Mr. Desai wants you to feel. Because, he understands that “you” are (in 1981), more than likely, a poor bloke who has spent an entire day’s wages on a cinema ticket in order to get a three-hour vacation from your relentless and demeaning grind…and he wants you to have it all! The nightclubs! The casinos! The babes! The cars! The pie fights! The cowboy-clad avengers on white horses leaping through the glass roofs of tourboats on the Thames! (Yes, really!) And, even after you’ve savored all this, the certainty that you still have almost two hours to go! Is this mazaa, or what? 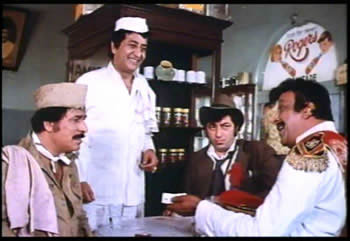 Don’t get me wrong: this astonishingly entertaining epic is by no means mere dumb spectacle. Though it seems rather beside the point at times, the complex and convoluted plot, greased throughout with zippy dialog and clever wordplay, is actually very ingenious—think of it as just another add-on at no extra charge. It concerns four working-class friends—a waiter, a tonga driver, a wedding band musician, and a photographer—who chip in to buy a five-rupee lottery ticket, promising to share a beggar’s fortune of Rs. 500,000 should they win. Needless to say, they do, and needless to say, all hell then breaks loose, both manmade (murder and betrayal) and natural (a devastating earthquake—recalling one that occurred in Koyna, Maharashtra, in 1967). Twenty years pass in an instant (which would make the film-time 1987, or six years into its own future…), and the aging survivors and their grown-up children get to sort out the strange workings of naseeb—while we get to sort out who they all are. 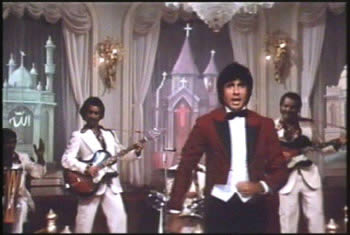 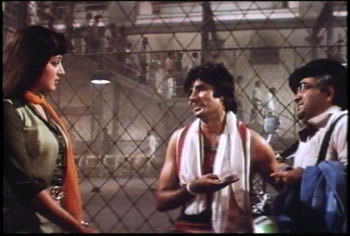 The son of an apparent murderer who was apparently murdered, John Jaani Janardan (Amitabh Bachchan; the triple names, connoting Christian, Muslim, and Hindu respectively, are explained in the film’s opening song) is now employed as a singing waiter in the luxury hotel built by the betrayers Raghu and Damu (Kader Khan and Amjad Khan) with their ill-gotten lottery gains. There he performs at a lavish party celebrating the “silver jubilee” of the Desai film DHARAM VEER (1977), which is attended by nearly all the glitterati of filmistan (Raj Kapoor does an amusing turn with an accordion, quoting his own SANGAM). Yet despite the class gulf that now separates them, John’s bosom friend is Vicky, Damu’s London resident high-rolling son (Shatrughan Sinha; “Vicky” is a common male nickname, short for “Vikram”). Both soon meet the beautiful and headstrong singing sensation Asha (Hema Malini) and fall in love with her, although John’s adopted sister Julie (Reena Roy), daughter of the Goan Christian Mrs. Gomes (Lalita Pawar), who raised John after his parents’ death, is also stuck on Vicky. The latter takes to the bottle due to his rejection by Asha, while she falls in love with his best friend John when he fist-fights his way into her heart…. Oh yes, and John has a younger brother, Sunny (Rishi Kapoor), who he is putting through an elite boarding school in Simla, where Sunny indulges in schoolboy highjinks with his sweetheart Kim (Kim), who also happens to be Asha’s sister (moreover, their father was the murdered band musician, Jaggi, the actual holder of the winning lottery ticket), in a subplot that, all by itself, might easily comprise a whole Hollywood film. And all this, too, unfolds within the first hour. 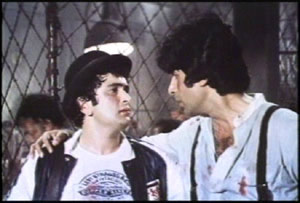 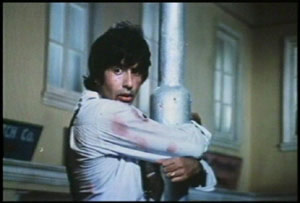 The remaining two-plus hours bring on (not necessarily in this order): a drug-dealing archvillain from Hong Kong named Don (Amrish Puri, of course), happiness sacrificed for the sake of dosti (in the memorable song Zindagi intahaan leti hai, “Life tests us”), gladiatorial boxing matches in a cage made of barbed wire, a glass roofed mansion attacked by submachine guns, Hema Malini doing Evel Knievel stunts on a motorcycle, fraternal love challenging the power of booze (in the song Chal mere bhai, “Let’s go, Brother”), and much, much more. The finale, set in a revolving restaurant atop a five-ishtaar hotel and featuring the song Rang jamaake jaenge (“We’ll put on a show before we go”), is rightly famous and offers yet another zany Desai tribute to international showbiz. Then the master pulls out all the stops (though it’s hard to believe that there are any left to pull) for a final fiery showdown with the baddies, accompanied by special effects that hold their own even today—and must have blown audiences away in 1981. 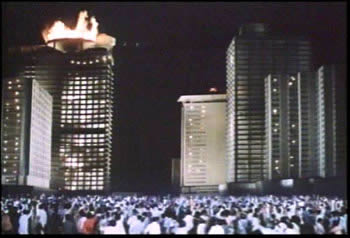 As always, Desai’s storytelling ambitions are epic, his tastes glam-plebian, and his visual ideas remarkably inventive. Notable too is his continued preoccupation with the essential harmony and compatibility of the three major religious communities in his hometown (he also throws in a good natured Parsi restaurant owner, who shows respect for the other faiths), whose abstracted symbols, devoid of any messy ritual or theological encumbrance, function as magical charms to repeatedly bless/save the heroes. And it is surely no accident that John and Sunny’s good-hearted Hindu father (played by Pran) is named Namdev, invoking the 15th century antinomian saint-poet whose devotional hymns, containing astute critiques of social hypocrisy, are still venerated and sung by both Hindus and Sikhs. Though this may seem a mere mechanical gesture, the director’s determined evocation of Bombay’s working class multiculturalism, like some of his locations and sets (replete with realistic details like grungy mailboxes, a “Horlicks” billboard, and lots of cinema posters) strikes an appealingly authentic chord in his surreal but sumptuous symphony. 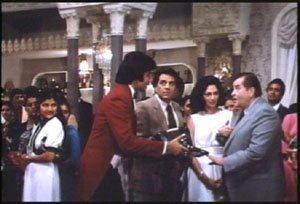 [The Baba Traders DVD of NASEEB offers a good quality print of the film. English subtitles are missing for the first scene—on my copy at least—but come on thereafter. They are harder to read than usual (white on white sometimes), but the viewer can manage. Songs are unsubtitled.]