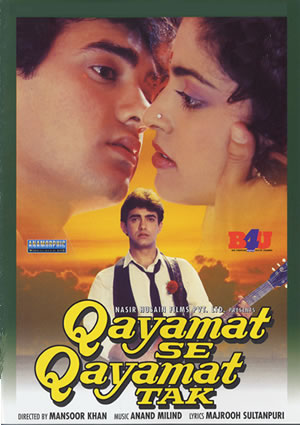 ("from Judgment Day to Judgment Day" -- Qayamat is a Persian word denoting the Islamic concept of the final judgment or doomsday.)
1988, Hindi, 155 minutes.
Directed by Mansoor Khan. Lyrics by Majrooh Sultanpuri. Music by Anand Milind.

This apparently routine tale of star-crossed adolescent lovers defying a blood vendetta between their Rajput clans became a hit, launching the career of Aaamir Khan. A prologue introduces the feud, begun in the village of Dhanakpur when Ratan, the brother of one Randhir Singh (Goga Kapoor), gets girlfriend and neighbor Madhumathi pregnant, then refuses to marry her. She kills herself, and her brother Dhanraj Singh (Dalip Tahhil) shoots Ratan on his wedding day. Dhanraj goes to prison for his crime, and his brother's family leaves the village for Delhi, where they join another brother's successful cloth business and raise Dhanraj's two young sons, Raj (Aamir Khan) and Shyam (Zutshi). After the credits, the story resumes fourteen years later, when Dhanraj, released from prison, joins the family in Delhi. Sent briefly to Dhanakpur on family business, Raj catches a glimpse of Randhir Singh's beautiful daughter Rashmi (Juhi Chawla), with predictable consequences. Though he seeks to avoid further contact, fate brings both their families to vacation at the Rajasthani hill station of Mount Abu, where Raj and Rashmi spend several days together after becoming lost in the woods. Their eventual flight from Delhi in the face of Rashmi's impending marriage to another man precipitates renewed hostility between their clans -- and (as Hindi film audiences know) there is no escaping from Family in this world.

Characters are largely archetypal and predictable. Although the headstrong Rashmi (a Rajput girl, as viewers are several times reminded) is initially portrayed as unusually forward in expressing her interest in Raj without appearing morally debased for it -- even leaving her assigned place on the other side of the campfire to sleep next to him -- his apparent indifference to her, born of his superior understanding of their situation (since he knows their family backgrounds and she doesn't) insures that he remains in control; he also gets to chop wood, build shelters, and shape an idyllic Sita-Ram woodland life for them both, for a time. The central object of attention in the film is indeed the debuting Khan, at whose earnest, cherubic face both girl and camera gaze adoringly.