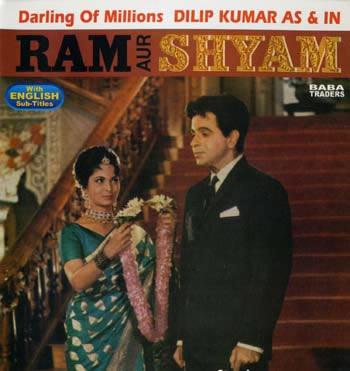 This delightful romp through Hindi film conventions (executed with especially baroque flair by a Madras studio, Vijaya International), features Dilip Kumar, near the end of his primary-hero career, apparently enjoying himself hugely in what the credits proudly trumpet as “HIS FIRST DUAL ROLE.” (Indeed, the double is such a staple of Indian cinema that it seems inevitable that every leading man will play one sooner or later.) Here he is both Ram, the timid and seemingly mentally-retarded son of a millionaire industrialist, and Shyam, a sturdy yeoman brawler with an appetite like that of the legendary Bhima of the Mahabharata. Mythological jokes and allusions (playing on the rhyming Rama-Krishna names) abound, especially in the song lyrics. It soon turns out that Ram isn’t really retarded, just terrorized by his sadistic, whip-wielding brother-in-law, Gajendra (Pran, of course), who, goaded by an evil mother, keeps Ram, along with his own wife and daughter, virtual prisoners in their palatial mansion. But when Gajendra contrives to get Ram engaged to Anjana (Waheeda Rehman, here graciously enduring the sixties—not even a beehive hairdo can mar her beauty and self-confidence!), the only daughter of another wealthy businessman (in order to snatch her huge dowry, after which he plans to do away with Ram), the trembling, stuttering heir escapes. As it happens, his burly look-alike Shyam is also in town that day, and circumstances contrive (a key term for this film) to get each mistaken for the other without their knowledge. They quickly fall into roles (and love affairs) they will maintain for most of the film—with Ram, after a brief and hilarious stint as a sadhu, finding happiness in the countryside and getting thick with Shyam’s childhood sweetheart Shanta (Mumtaz), and Shyam taking charge of the family business, romancing Anjana, and putting Gajendra in his place. The plot thickens when the villain figures out what is going on and contrives a diabolical scheme to do away with both men. Nobody in the film seems to take the story very seriously, least of all Kumar, who (despite looking a bit winded during rooftop chases) clowns his way through both roles with a zest that prefigures the antics of Shah Rukh in the 90s. Add lurid technicolor sets (Anjana’s Barbie-moderne home, and Gajendra’s gothic and rococo mansion), bouncy songs (especially the children’s birthday party number, Aayee hai bahaaren, in which Shyam sings, “Ram’s lila delights the heart, Krishna is playing his flute!” while tiny tots do the twist), and some fine camerawork (Chanakya, who previously directed successful Telugu and Tamil versions of this story, has a sharp eye for locations and their possibilities), and you have a double-your-pleasure package.

[The Baba Traders DVD of this film is of uneven quality. Images become blurred during action sequences, some subtitles are missing, and songs are unsubtitled.]