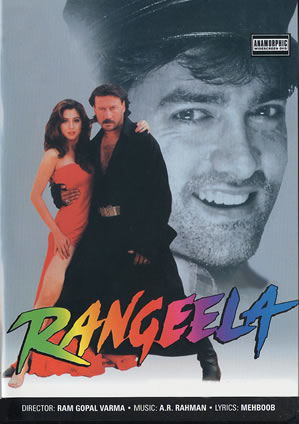 Ram Gopal Verma began his career in the Telugu film industry, but achieved national success with this, his second Hindi-language film, in large part due to the strength of Aamir Khan's convincing performance as a streetsmart hustler, reveling in the rusticated-yet-urbanized argot of his class. An easygoing romantic comedy, it is also a film about film-making Bombay-style; indeed, about the making of an imaginary film called "Rangeela," which premieres in the final reel and, prophetically, proves to be a hit. The fact that it is sometimes unclear, especially in song sequences, which of the two films we are watching, merely adds to the appealing unreality of the concoction. Not surprisingly, RANGEELA is also something of a salute to Bollywood's hometown and its film-saturated culture, and displays some of Verma's talent for shooting urban locations and types that he would later deploy so masterfully in the darker and more accomplished SATYA (1998).

Mini (Urmila Matondkar) is a wide-eyed ingenue shaking her booty in a filmi chorus line while dreaming of being cast as a heroine. Her madcap father communicates almost entirely through filmsong lyrics, and her neighbor and pal, the fast-talking orphan Munnu (Khan), makes his living as a scalper, peddling tickets to masala hits like "Mr. Bond," starring action-hero Raj Kamal (Jackie Shroff). Allusions to other films, Indian and American, abound, and there are some charming vignettes and sight gags: the film-within-a-film's tormented director Steven Kapoor (Gulshan Grover), who worships Spielberg and yearns to be in Hollywood, where (he fancies) directors get Respect; his niggardly Punjabi producer P. C. (Avtar Gill), who will go back to farming in Ludhiana if "Rangeela" flops; even a cameo by cinematographer Rao as himself. Mini's big break comes when ditzy starlet Gulbadan (shepherded by her atomic powered stage mother) unexpectedly ditches the picture to marry her chauffeur. Gulbadan had balked at the film's "MTV-style" choreography, but Mini has no such hangups. When Kamal spots her frenetically working out on a deserted beach (these seem to abound in her section of Bombay), he immediately orders a screentest, but only Munnu's patient coaching enables her to overcome her subsequent camera fright. The results are predictable: not only is a star born, but the suave older hero falls under the spell of his new discovery, even as the poor-but-inarticulate boy next door struggles to express his love for her.

Eight song sequences juxtapose stark streetscapes and their jiving denizens (in one, a chorus line of fatigue-clad commandos waving AK-47s) with surf-drenched Goan coastline and elemental Thar sand dunes. In its second half, the film risks becoming a series of thinly-linked music videos (though, generically speaking, this is a bit like complaining that "Rigoletto" has too many arias); these prolonged lovescenes display Mini and Kamal in statuesque mithuna poses and ever-changing erogenous costumes straight off the covers of supermarket romances. But at the climax, and following the acclaimed premiere of Kapoor's colorful opus, the plot's one burning question resurfaces: will Mili choose the rich, hunky superstar with soulful eyes and swashbuckling wardrobe, or the baby-faced, unemployed street kid with Brando-esque cap, fishnet T-shirt, and perpetual five o'clock shadow? It is -- like both versions of "Rangeela" -- a pleasant no-brainer.