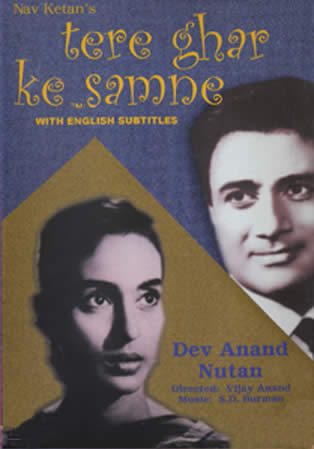 This loopy romantic comedy about upper-middle class Delhiites stars Dev Anand as Rakesh Kumar, a young USA-returned architect whose ultra-modern house designs are in high demand—these feature swooping precast concrete curves and trellised cantilevered balconies, of the sort that now indeed dot many of the southern suburbs of the Capital that date from this period. In one of the new colonies, two feuding and apparently nouveau-riches tycoons, Seth Karamchand (Harindranath Chattopadhyay) and Lala Jagannath (Om Prakash), purchase lots directly adjacent to one another. Each then engages Rakesh to build a palatial dreamhouse "in front of" (and eclipsing and obscuring) the other's. The problem is that although Jagannath is Rakesh's own hot-tempered father, the young architect promptly falls in love with the bilious Karamchand's daughter Sulekha (Nutan). As if further levity were required, there are two comical couples: Sulekha's libidinous brother Ranjit, a.k.a. "Ronnie" (Rajendra Nath), on leave from a military post in Kashmir, who falls in love with Rakesh's glamorous Goan secretary Ginny Fernandez (Zareen Katrak), and Rakesh's comic sidekick Mohan (Rashid Khan), who falls for Sulekha's maidservant Moti (Praveen Chowdhry). The resolution of this plot worthy of a lite Mozart opera unfolds through a strong musical score, several histrionic speeches, and (perhaps most notably) a deliciously-bizarre double dreamhouse (worthy of early Barbie) that ultimately spatially unites the two warring families around the Vedic fire altar at which Rakesh and Sulekha's nuptials are performed.

Memorable songs include Dil ka bhanwar kare pukar ("the bee of the heart calls out"), sung as Sulekha and Rakesh descend the winding stairs of Delhi's 13th century Qutb Minar after having gazed voyeuristically down at Ronnie and Ginny boldly holding hands in the courtyard below; Tu kahan, yeh bata ("Where are you? Tell me") sung as Rakesh wanders the moonlit streets of Shimla in search of Sulekha (both songs performed by Mohammed Rafi), and the surrealistic pictureization of the title duet Tere ghar ke samne ....ek ghar banaunga ("I'll make my home...in front of your house"), in which Rakesh muses on his growing love for Sulekha, who appears suspended in his whiskey glass (sung by Rafi and Lata Mangeshkar).

Some fairly tacky soundstage sets alternate with wonderful location shots around Delhi and Shimla. Throughout the film, images of architecture and especially of home-construction serve to evoke the dual projects of modernization and nation-building (in one memorable scene, Rakesh, pursuing Sulekha to Shimla, drives his scooter through the rising Le Corbusier city-center of Chandigarh, one of the great emblems of the Nehruvian modernization project). As the film's climax approaches, the verbal and visual messages urging the pair of feuding patriarchs to unite to form a single, undivided household inevitably evoke—even in so light-hearted a narrative—the serious threat of familial and social disintegration embodied in such seminal tales as the Mahabharata, and dramatized anew by the trauma of Partition and the subsequent experience of Hindu-Muslim communal tensions. All such backgrounds contribute to the cathartic release of the ultimate embrace, not of Rakesh and Sulekha (who have been in love since the second song sequence), but of their weeping fathers.

(The Baba Digital DVD of this film includes decent English subtitles, though with a gap of about 10 minutes toward the latter part of the film. The non-Hindi-knowing viewer can manage, however.)