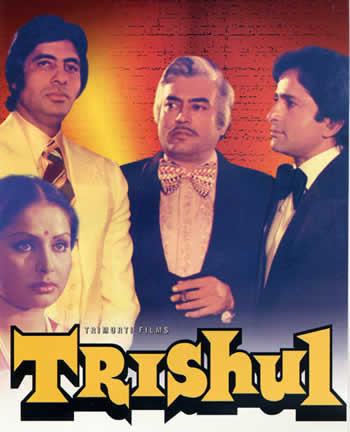 This entertaining if predictable opus, a great hit in its day, displays all the lakshanas (a term used by Sanskrit pandits to describe the stock ornaments of a text) of the late-70s “Masala Blockbuster”: a cast thick with stars (but dominated by Bachchan), a plot centered on retribution and redemption spanning two generations, elegant Salim-Javed dialog, plenty of dishoom-dishoom (a word coined to describe the sound of Bachchan’s fist slamming into somebody’s face), and enough loud-patterned polyester to outfit an army of disco dancers. A tale of dueling contractors that resembles (but lies emotionally somewhere between) the frothy TERE GHAR KE SAMNE and the dark KALYUG, the film also sports six songs and lots of recognizable New Delhi locations.

If Raj (Sanjeev Kumar) and Shanti (Waheeda Rehman) look too old to be courting in the film’s opening idyll (featuring the song Kehtay hain—“They say”), it is, of course, because they are going to age twenty-five years in a reel or so. Their wedding plans are thwarted when Raj’s millionaire boss, who dotes on him, offers his own daughter in marriage—an offer that Raj’s ambitious mother cannot refuse. Raj himself spinelessly capitulates, only to learn, post-nuptials, that Shanti herself is pregnant by him. Angrily refusing Raj’s offer of charity, Shanti goes away to bear her child—a boy named Vijay, naturally—in wretched poverty (cf. AWARA). Vijay morphs from baby to Bachchan via the song Tu mere saath (“You are with me”), and Shanti dies, but not before spilling the dope about who Vijay’s father is. The Angry Young Man heads for the Big City to take his revenge. There, Raj has greyed-out into R. K. Gupta, still married to the boss’s daughter, but now himself at the helm of a giant contracting firm. His carefree, playboy son Shekhar (Shashi Kapoor) returns from London (where, despite the cold, they apparently never button their shirts above the navel) to join the family firm, and quickly begins wooing—through golf, tennis, yoga (!), and the song Kamaal karti ho (“You’re amazing”)—Sheetal (Hema Malini), another millionaire’s child. Raj Gupta also has a daughter, Bubbly (Poonam Dhillon), who is in love with one of his own workers, the babyfaced Ravi (Sachin).

There are plenty of other characters too, including Gupta’s hardworking secretary Geeta (Rakhee), who would appear destined for Vijay (he being the only principal left unattached). But as in other classic Bachchan films, romance takes a distant backseat to angst-ridden revenge, as Vijay plots and quickly effects the frustration and eventually the financial ruin of “Mister R. K. Gupta” (as he always calls him), through a combination of cut-throat competition, brute force, and an endless barrage of withering double-entendres (at one point the newly-successful Vijay tells Gupta sarcastically, “I concede that whatever I am today is because of you”), which, naturally, Gupta doesn’t get. But blood is thick and patrilineal in the masala universe (just as women—with the exception of The Mother—are attractive but mostly peripheral), and viewers should suspect early on that the triple prongs of the titular weapon will ultimately prove to be the Gupta Guys, purged (by penance) of all animosities, and reunited to form one big, happy construction company.

The camerawork is beguiling, and viewers familiar with Delhi will enjoy seeing how it looked shortly before it became permanently choked with motor vehicles; romantic interludes unfold among the Sultanate-period tombs of lovely Lodi Gardens, and the concrete towers then rising all around the Connaught area are likewise used to good effect (Shekhar’s office contains what appears to be a model of the present Life Insurance Corporation colossus on Parliament Street). Hit songs also include Kaam ki cheez (“Love is a fine thing”), sung by Shekhar and Sheetal at a poolside party, with one ironic verse added by Vijay—his only sung bit in a film in which he is mostly too self-righteously angry to sing.

[The Eros-Digital Entertainment Inc. DVD of TRISHUL features a good quality print of the film. Though songs are unsubtitled, the titling of dialogs is surprisingly good, so that a bit of the flavor (though alas not the wit) that made Salim-Javed so famous comes through at times.]